The face of people gathered slowly became clear as the carriage getting closer to the huge gate.

I mean, the face of a soldier with spear is that of a lizard. There are also those with the appearance of cat but wore clothes and walking on two legs. He’s talking with someone with face similar to that of a sheep.

I’ve never heard about animal people lived in medieval Europe. There’s no doubt that I’m in another world right now. 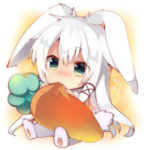