The girl who came looking for me into the classroom — Felmina-san, invited me to eat together in the cafeteria. It was a buffet-style school cafeteria with a spacious dining area filled with lively atmosphere, and the aroma of delicious food drifting around.

Well then, what should I eat today….

Because it’s before an important battle, I should keep it light.

The table was decided, I and Felmina-san then split up to pick our preferred lunch. I chose the vegetable-centered dish while thinking about the nutritional balance. Felmina-san was already waiting when I returned to our table.

Felmina-san who was intimately talking to the girl sitting nearby, turned around — swinging her red ponytail.

Felmina-san made such a comment after seeing my lunch.

“That’s not good…. boys should eat more! You can’t get stronger like this! Food is the source of power after all!” (Felmina)

Having said that, Felmina-san made a pose to show her bicep.

Not even ten minutes passed since I got to know her, but I understand quite well that Felmina-san is someone with a friendly character.

For me, Felmina-san is a tough opponent — in other words, “an enemy”. However, when she talks to me so familiarly, it’s impossible to see her that way.

I’ve decided to enjoy the interaction with Felmina-san, and change the gear just before the battle starts.

“Forget about me, isn’t Felmina-san eating too much?” (Ash) 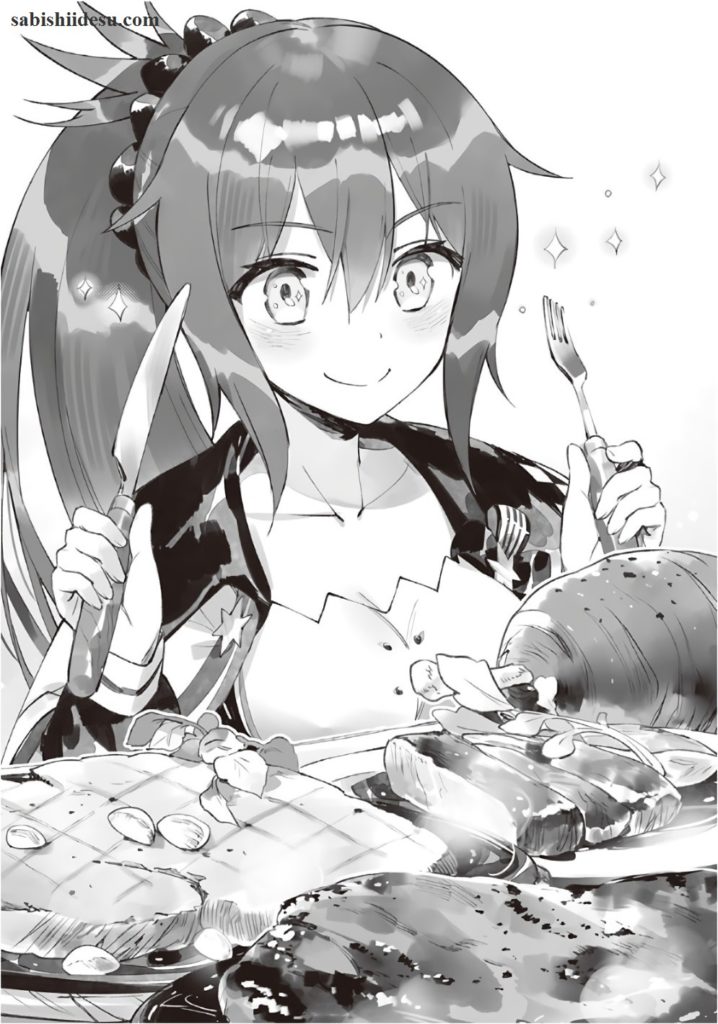 In front of Felmina-san, there are four plates bigger than mine, and all of them are full of meat dishes. It’s not the amount of a girl eats in single meal….

“Because I overworked my head during the written exam, I’m really hungry right now!” (Felmina)

That’s right. There’s no way a girl who eats so much have such a nice figure.

“Yeah, today is extra heavy. Usually, there are only three plates after all.” (Felmina)

How does she even maintain that figure when she eats so much?

Is it her chest? Did all the nutrients go to her chest?

Couldn’t wait it any longer, Felmina-san started to eat her lunch. She stuffed the meat dish into her mouth one after another with quite a speed.

“Speaking of which, Ash-kun is a transfer student, right?” (Felmina)

“I heard it from Erina-sensei, that Ash-kun was amazing. The content of the transfer test couldn’t be made public, but she said that you were amazing!” (Felmina)

Erina-sensei is the lady who supervised the team battle during the transfer student entrance test.

“I’d be happy if you could tell me how amazing you are.” (Felmina)

Felmina-san then looked straight onto my eyes.

Oh, I see…. Felmina-san invited me to a meal to gather information on “Ash Arkvald”. In that case, there is no need to answer her honestly.

“This is something you will understand after we actually fight.” (Ash)

Felmina-san didn’t lose her smile. Even without information, Felmina-san seemed to be confident that she would win.

“Okay, then it’s your turn to ask me a question!” (Felmina)

“I just asked a question, so to make it fair, it’s your turn to ask me a question. Come on, ask me anything!” (Felmina)

“Then, how long have you been in the advanced class?” (Ash)

“It’s since the first day of school. I guess I’m some kind of honor student. I’ve never lost until now after all!” (Felmina)

“That’s one of two things I’m proud of.” (Felmina)

Felmina-san bit and chewed the meat without reservation. Before I realized it, all the plates in front of her were almost emptied.

“You will lose one of them if I win. Please don’t hold a grudge against me when that happens!” (Ash)

“Hahahaha…. do I look like that kind of woman? Please rest assured, because I won’t hold a grudge even if I lose. I will only blame my own weakness at that time!” (Felmina)

Felmina-san has a very good personality, indeed. Whether she wins or loses, I’m sure the way she treats me won’t change.

“I’m glad that my opponent is Felmina-san.” (Ash)

“Oh! I will give that line the third place in the list of words that made me happy this year!” (Felmina)

I can more or less guess why she looks extremely happy right now. Normally, the student who were paired with Felmina-san in a mock battle, would feel that they’re unfortunate.

If it’s just a practice match, I’m sure their response will be positive. “I can learn something from the battle against advanced class student.” — or something along that line.

However, this is an important promotion test. It’s just normal if you want someone who can be defeated easily as your opponent.

If you think that fighting against Felmina-san is an unfortunate thing, of course the person herself won’t feel too good as well.

“Honestly speaking, I hope that Ash-kun is stronger than me….” (Ash)

Felmina-san answered with a serious expression.

“Then, why would you want to fight someone who’s stronger than you?” (Ash)

“I’m going to join the Magic Knights Order after graduating from the school, and I want to protect everyone I love from the monsters.” (Felmina)

Speaking of Magic Knight Order, it’s the elite group of elites, that only excellent wizards can join. There will be variations in ability depending on the department, but…. If it’s Felmina-san, I’m sure she will be accepted even with her current ability.

“I want to be strong enough to be able to defeat any monster in one shot — That’s my goal before the graduation.” (Felmina)

Felmina-san’s goal is not to join the Magic Knights Order, but to protect humanity from the threat of monsters. That being the case, there is nothing better than to become even stronger.

Her feeling of wanting to fight against a strong opponent, I understand it well.

Because I’d like to be a great wizard like Master (now I know he’s actually a martial artist though), I was able to work hard to improve myself every day.

Felmina-san is probably looking for someone who she can set as her goal. If she can find such a person, I’m sure she will be able to work even harder than before.

I like how Felmina-san isn’t satisfied with just being in the advanced class, and still striving to get even higher. I really want to continue to interact with her even after the promotion test.

“From your perspective, do I look strong?” (Ash)

“Hmm…. Honestly speaking, you don’t look like very strong to me.” (Felmina)

“Oh, but the things about you, I like them very much!” (Felmina)

“You were glad to have me as your opponent — that was the first time someone said those words to me. I’m sure Ash-kun will get even stronger and stronger in the future. I really love hardworking people!” (Felmina)

Having said that, Felmina-san carried the meat to her mouth.

The meat on her hand fell down.

Felmina-san stared at my face and then frozen. Her beautiful skin gradually turned red.

Huh!? Did I say something strange…?

“Th-That’s too soon! Ye-Yeah, we first should learn about each other better before talking about marriage, right!?” (Felmina)

“Hello, are you listening!? What I said before, it means that I like you as a person!!” (Ash)

Felmina-san seemed to have been convinced.

“Ye-Yeah, of course! Hahahaha, sorry I misunderstood it! This is the first time in my life someone confessed to me, I kinda messed up the answer.” (Felmina)

“That wasn’t a confession though. Or rather, you have not been confessed? That’s surprising.” (Ash)

“Surprising!? Do you mean that I’m cute enough to be confessed every day!? W-Well, this is the first time someone told me that. Somehow, it sounds like a proposal….” (Felmina)

Felmina-san tried to cover her blushed face with her hands.

“Well, anyway, that’s how it is. Let’s fight without holding back!” (Ash)

I decided to conclude our talk.

Talking with Felmina-san is fun, but we are getting nowhere right now.

“Yes. Win or lose, there will be no hard feelings! Personally, I don’t want to be hated by Ash-kun after all.” (Felmina)

Felmina-san said so with a fresh smile and blushed face.