The practical test progressed steadily, and after waiting for around two hours, Nina-san’s turn finally came. Erina-sensei who would be our supervisor in this test, opened the door of the third arena. The name of Nina-san and Noire-san were called from the top of the stairs.

Because the students who have finished their test leave the arena through the back door regardless of winning or losing, I will meet Nina-san again in the classroom. At that time, it would be nice if I could hear a good news from her.

“Hmm… so our turn comes after Noir-chan’s. I don’t like it!” (Felmina)

“You will find out soon enough. For now, it’s better to prepare yourself!” (Felmina)

Felmina-san said something that seemed to have a deep meaning.

What does she mean…?

The door of the third arena opened when I was still wondering about the meaning of her words.

It’s already over!? You must be kidding me!?

Not even a minute passed since they entered the arena, but…. are the differences in their ability that huge?

Erina-sensei also seems to be shivering. I wonder what happened in the arena.

I found the answer of that question immediately after I entered the arena.

The arena has turned into an ice world. The wall frosted, various size of icicles hung on the ceiling, and a huge ice mass towered the center of the arena.

Felmina-san rubbed her palms together to get some warmth for her shivering body.

I was surprised that the arena has turned into an ice world, but that’s it. I don’t feel cold at all.

That might be true for a normal people, but not for me.

As the result of harsh training under the guidance of Master, my body has become really strong against heat or cold temperature.

The temperature inside this arena might actually be below the freezing point, but for my body, it’s just a pleasant cool.

“Oh well, I’m going to warm you up right away anyway!” (Felmina)

Felmina-san carefully descended the slippery stairs so that she wouldn’t slip and fall. Before long, we both arrived to our destination.

On the arena, I and Felmina-san took a distance of about five meters from each other, and stood face to face. There were ice blocks all over the place, and an ice wall was standing behind Felmina-san.

Felmina-san was holding a magic wand about 30 cm long in her hand.

How nice to have a magic wand. I have never had one until this day….

“I will explain the rules!” (Erina)

When I was admiring Felmina-san’s magic wand, Erina-sensei’s voice echoed in the arena.

“Just as you all know, there’s special barrier protecting this arena! There will be no physical damage from the attacks you received! Then again, you will still feel the pain! The one who lost consciousness first, loses! Let’s finish this duel fast and take a warm bath! Well then…. Starts!” (Erina) 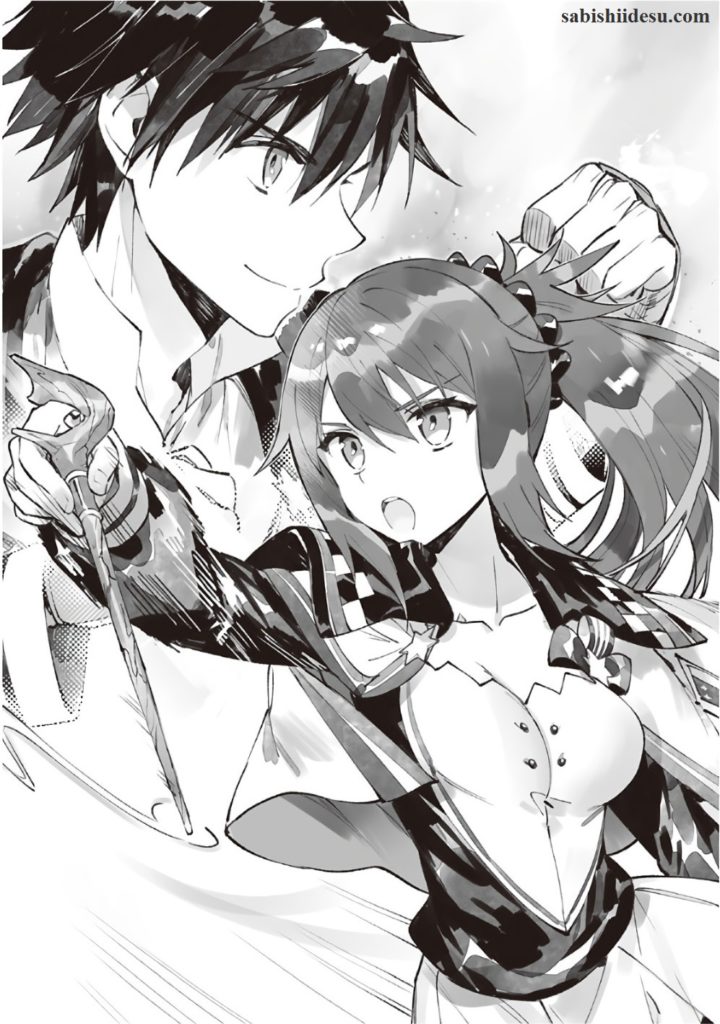 Immediately, Felmina-san swung around her magic wand like a conductor, to draw a rune in the air. With a sophisticated and refined movement, the rune was completed in no time and a huge fireball appeared above her head.

“Like I said before, I’m going to warm you up right away!” (Felmina)

The moment Felmina-san pointed her magic wand at me, the giant fireball also flew towards my direction. I took a deep breath and then blew it out at once. The giant fireball in front of me disappeared in an instant.

I feel like being the wolf from [The Three Little Pigs] story, right now.

While still pointing her magic wand at me, Felmina-san’s body turned stiff for a few second. Her head seemed unable to keep up with the unexpected event.

“Wh-What kind of magic did you use just now!? Or rather, where is your magic wand!? No way, did you draw the rune in your head!?” (Felmina)

“No human can do such a thing!? I can’t believe it…. You’re able to cast magic without a magic wand….” (Felmina)

It was unprecedented to draw a rune in your head, but for Felmina-san’s common sense, it seemed that answer was far more realistic than mine.

Having said that, I launched a fist strike. There was a distance of fifteen meters between us, so of course my fist wouldn’t reach her. However, the range of wind pressure produced by my first strike was more than 15 kilometers.

The ice wall behind Felmina-san exploded not long after I released my fist strike. The fist-sized ice fragments splattered like a shotgun.

Not only destroyed the ice wall, the wind pressure produced from my fist strike also opened a hole on the arena wall that made of unbreakable material.

Seeing the hole, Felmina-san leaked out a funny voice. Though panic, she received no damage from that attack. The aim of my attack went off because my foot slipped after all.

“Th-That spell…. what is the name of the spell you just used…!?” (Felmina)

“Fist Strike? I’ve never heard of that spell. It seems like I still have a lot to learn.” (Felmina)

Once more, Felmina-san seemed to have misunderstood my words.

Oh well, if I’m in her position, I also won’t believe an explanation such as “that was just a wind pressure from my punch”, after seeing such a misery.

“I’m a little confused because I see a lot of new things today. However, I now understand that Ash-kun is strong! You deflected my attack from before, but next…. I will definitely defeat you with my special attack! If you don’t like it, you should get serious too!” (Felmina)

No matter how great a wizard is, as long as it’s a wizard, he/she will be vulnerable while drawing a rune.

It is easy to defeat Felmina-san in the current state. However, we have made a promise to make it a duel that we won’t regret it. If I defeat her before she can use her special attack, there will be regret left after the duel ends.

Besides, I would like to see the “special attack” of one of the best student in the advanced class — Felmina-san.

I will defeat Felmina-san after she uses her special attack. That way, it will become a duel free of regrets.

“No one was able to stand after receiving my special attack. Come forth — Flame Devil 《Ifrit》!!!” (Felmina)

Pop! — a small fireball popped out from Felmina-san’s magic wand. That fireball kept expanding, and in the blink of an eye, it transformed into a bipedal beast-like figure five meters high. What Felmina-san summoned looked exactly like “the devil of fire”.

The complexity of the rune is a given. This is one of the top class fire element magic that requires tremendous magical power to cast — Flame Devil 《Ifrit》.

Even though she is only a student, Felmina-san is able use a spell that can be called the pinnacle of fire element magic. I wonder how much effort has been spent to master it.

Looking at the huge figure of flame monster before me, I couldn’t help but having such thoughts. In the other side of the blazing flame, Felmina-san smiled confidently.

Under the command of its mistress, Ifrit charged at me. I then positioned my palm into the shape of a fan, and swung it towards Ifrit.

The Flame Devil 《Ifrit》 disappeared like a candle light.

“That was a really cool magic. Well then, let’s end this quickly!” (Ash)

I took a stance to launch another fist strike (punch).

“Even if you say that…. This is a duel, remember? It won’t end until either one of us goes down.” (Ash)

“This is a serious duel, but you didn’t take it seriously!” (Felmina)

“I’m taking this seriously though.” (Ash)

“That might be true, but Ash-kun… You’re still holding back your power!” (Felmina)

It’s true that I’m still holding back. However, it doesn’t mean I don’t take Felmina-san seriously, I simply feel there’s no need to go all out to defeat her.

“I know Ash-kun is strong! Even far stronger than me! I will definitely lose this duel! I know that, but….” (Felmina)

Felmina-san stopped talking for a moment and then continued on.

“I don’t want to lose like this! Until Ash-kun gets serious, I won’t let this duel end!” (Felmina)

Having said that, Felmina-san started drawing a rune, and a new flame devil was born.

Even though the amount of magical power to cast that spell is enormous, Felmina-san has already casted it twice today….

I was surprised by the amount of magical power that Felmina-san possessed, but I’m sure it’s not bottomless.

Felmina-san was getting unsteady. It seemed that her magical power almost run dry after casting Flame Devil spell twice.

Magical power has a close relationship with mental power. However, overuse it will put a burden not only on the spirit, but also on the body.

This is exactly what’s happening now. Because overusing her magical power, Felmina-san is in a state where she couldn’t even stand upright.

“This is…. my seriousness! Now come…. it’s your turn to show me…. your seriousness!!” (Felmina)

Commanding five flame devils while staggering, Felmina-san challenged me to fight her with full power.

Seeing her determination, I had no choice but to fight her with my full power. I focused my entire nerve on my fist.

I won’t be holding back anymore. Instead of wind pressure, I will punch her directly with my fist.

I won’t be using a half- hearted punch like when I defeated Demon Lord Darkness Emperor, but I will put my very soul into this punch.

Suddenly, all the flame devils disappeared.

I have not done anything though…. No way, did my scream accidentally destroyed them!? Nah, it seems to be different this time….

Felmina-san was lying face down while still holding her magic wand tightly.

I guess she fainted from overusing magical power, and because their mistress lost consciousness, all the flame devils also disappeared.

“That’s it! The winner is Ash Arkvald!” (Erina)

Erina-sensei who went down to the square, signaled the end of the duel after confirming Felmina-san’s condition.

“How come? It’s your victory no matter how I look at it.” (Erina)

“That might be so, but…. I mean, I won the game but lost the match…. I just learned my spiritual immaturity. In addition, I also feel bad towards Felmina-san.” (Ash)

Erina-sensei turned a gentle smile at me.

“You’re such a serious boy. Oh well, don’t worry about it! I’m sure she’s satisfied with this result.” (Erina)

“You will find out soon enough. Well then, please take care of the rest!” (Erina)

Having said that, Erina-sensei left the arena.

What does she mean by I will find out soon enough? Forget it! I cannot afford to leave Felmina-san as she is.

There is no trauma, but she will catch a cold if I leave her alone. I need to bring her to the infirmary and let her rest on a warm bed.

I raised Felmina-san’s body. That moment, I finally understood the meaning of Erina-sensei’s words.

Just before she lost consciousness, Felmina-san seemed to have noticed that I was about to attack her with my full power. Even though she lost without tasting it, Felmina-san was satisfied with the result.

…. well, those are just my guess though. However, I’m sure it’s not too far from the truth. I mean, Felmina-san has such a satisfied smile of her face right now.