“Okay, everyone, please take a seat! This is first-come-first-served based, so pick whichever seat you like!”

A female teacher came in at the same time my conversation with Noire-san ended. The same teacher who supervised my practical test during the transfer student entrance test and the promotion test — Erina-sensei. The seat in front of Noire-san was empty, so I sat there.

Felmina-san talked to me from the next seat. In front of my seat, sitting a blonde girl.

“Now then, since we have some new faces here, let’s start with self-introduction!” (Erina)

Upon receiving an instruction from Erina-sensei, it was decided to do self-introduction in order from the front row on the corridor side.

The self-introduction went on steadily, and finally it was the turn of the girl sitting in front of me. 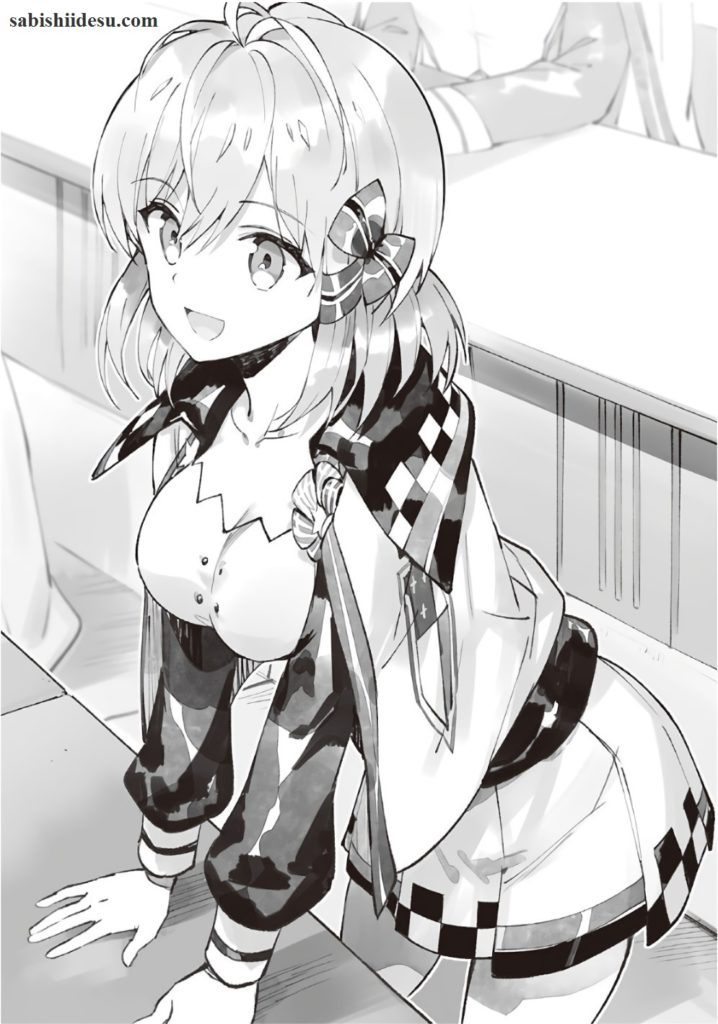 She said her name with a very easy-to-hear voice.

Effa-san…. is she the same Effa-san that Nina-san was talking about it before? This means she is a wizard on the same level with Felmina-san and Noire-san.

“I’m from Nemuneshia! I’m going to this school to find myself! Best regards!” (Effa)

Effa-san sat down when she finished introducing herself.

Eh, is that all? How about your specialty? The other classmates all said about the element they’re the best at in their introduction. Besides, I don’t understand the meaning of she’s in this school to find herself.

“I’m Ash Arkvald. My specialty is wind element. Pleased to meet you all.” (Ash)

My turn came at last and I successfully introduced myself.

I actually don’t have a line of expertise. However, because I once said to Erina-sensei that my specialty was wind element, I will stick to it until the end.

If I imitate the daily routine of an excellent wizard, my magical power might be awakened. — while keeping such a pale expectation in my heart, I asked my classmates about their daily routine.

“Something that I do every day? Let’s see…. I read difficult books.”

“I eat a heap of meat five times a day!” (Felmina)

“I call my dad every day. If I did not do it, my phone won’t stop ringing and it’s scary!”

“I make a preparation for the class and doing some review. The review part is especially important!”

“I do gymnastics every morning.”

I thought it would be a great daily routine because they’re advanced class students, but it’s quite normal. Though I don’t think that doing gymnastic and writing diary every day will help me awakening my magical power, I won’t know until I try it myself.

While I was writing down the daily routine of my classmates that I have learned in my notebook, it was almost the time to go home.

Effa-san is the only one I haven’t asked about it….

When I called Effa-san who was preparing to leave, she turned a big smile at me.

“Do you have something you do every day?” (Ash)

“I wonder when will my turn come — I couldn’t help but kept thinking like that while restlessly waiting. Okay~ it’s about my daily routine, isn’t it? The answer is: I’m looking for myself, that’s it!” (Effa)

I’ve heard about going on journey to find oneself, but this is the first time I heard someone who did it as a daily routine.

“During the introduction, when you said that you came here to find yourself, did that mean you want to find your future dream in this academy?” (Ash)

“I want to work in my hometown after graduating. That’s my dream of the future.” (Effa)

Effa-san already has her dream set.

“But Nemuneshia is quite a country town, isn’t it? I think Effa-san can get a job in a better place….” (Ash)

“I love my family! I want to go back to my parents’ house as soon as possible!” (Effa)

“In that case, wouldn’t it better if you just enter a local school?” (Ash)

Nemuneshia is at a distance where it takes more than a day by airship from Erstania. If she doesn’t want to leave her family, she should go to a local school instead….

“I’m a special student. The principal invited me to come to this school, and he also exempted me from the tuition fee and also paid my living expense.” (Effa)

To receive an invitation directly from Principal Phillip, I’m so envious!

“It’s rude to turn down an invitation from a king, so my parents told me to attend this school. Therefore, I don’t have anything I want to do in this school in particular.” (Effa)

Oh, I see. In other words, what she means by finding oneself is to find a goal while she attends this school.

“In that case, how about doing magic training? Perhaps something like improving your weak elements before the graduation.” (Ash)

The wizard who was born with magical power that’s favored by all spirits is a very rare existence. Principal Phillip is one of those people. In other words, if Effa-san wants to do it, she will be able to use any magic.

“I want to find a goal that’s difficult to achieve, and I want to work hard to achieve it before the graduation.” (Effa)

This must be something unrelated to magic, at least.

I tried to come up with an idea.

“Then, how about something like earning a lot of money before the graduation?” (Ash)

“My mom is going to be angry at me. She often told me that the student’s job was to study after all.” (Effa)

“I see. You have a very strict mother there. If so, how about finding a lover before the graduation?” (Ash)

“The memories about first lover will last forever, I don’t think it’s a good idea to put a deadline in finding it.” (Ash)

….and so on. I kept suggesting various ideas, but everything was turned down. The sun leaned to the west when we were busy talking. Only I and Effa-san remained in the classroom.

“You’re right. Thanks for your suggestion anyway…. By the way, I’ve been thinking about this since a while ago, but why are you going around asking about this kind of question to everyone in the class?” (Effa)

“If I imitate what an excellent wizard usually does, I thought that I might be able to use magic like them too.” (Ash)

Hearing that, Effa-san was puzzled.

“You make it sounds like you’re someone who can’t use magic.” (Effa)

“To tell the truth, I actually don’t have magical power.” (Ash)

“Do you mean you really can’t use magic because you don’t have magical power? Th-Then, how did you manage to win against Felmina-san?” (Effa)

“Martial arts? Do you mean something like punch or kick?” (Effa)

To be precise, it’s the wind generated by my fist strike and breath. The decisive factor is that Felmina-san ran out of magical power though.

However, if I tell her that I extinguished Felmina-san’s fireball attack using my breath, I’m sure she will even more confused than now. It’s better to keep the details secret.

For some reason, Effa-san’s eyes were sparkling like a child in front of a birthday present.

Why does she look so excited? This reaction is unexpected…. I was sure that she wouldn’t believe me.

“I want to be a martial artist like Ash-kun before the graduation! My goal is to be a versatile wizard!” (Effa)

Having said that, Effa-san lowered her head to me.

“Ash-kun…. I mean, Master! Please take me as your disciple!” (Effa)