Noire got off at the station just before Nemuneshia’s, and headed straight to the wasteland on foot. Then, after walking for about half day, she arrived at her destination — a cuboid building that stood tall in the middle of the wasteland, illuminated by the setting sun.

In the vicinity of that cuboid building (laboratory), an old man in lab coat — Lingland, stood waiting for Noire.

“Only a fool who crosses the wasteland where monsters can appear at any time on foot, but that’s really like you!” (Lingland)

Instead of greeting, Noire received insults from Lingland.

“I was told to preserve my magical power.” (Noire)

“You wouldn’t be able to use Fly spell anyway!” (Lingland)

“You couldn’t even remember such a simple rune. You’re really a stupid girl!” (Lingland)

Having said that, Lingland laughed at Noire.

“Unlike the stupid you, Golem is smart! He can master all sorts of spells! He can use grand scale magic endlessly!” (Lingland)

After boasting about the golem that has a bottomless magical power, Lingland laughed even louder.

Because the specially designed magic circuit was huge, the golem should be at least 8 meters high. However, there was no place where such a big object could hide. Noire wondered if the golem really existed.

Could it be this golem is just a product of his imagination?

He might have become mentally weird because too absorbed with his research, and he is seeing things now.

But Noire’s expectations were denied in the next moment.

“Now then, Golem, show yourself!” (Lingland)

Right after Lingland ordered so, the Invisible spell was cancelled, and a human-shaped rock appeared in front of Noire. Two magic wands were held in his rugged hands.

“Speaking of which, are you tired from walking, Noire?” (Lingland)

Noire immediately nodded. Noire could have borrowed a horse somewhere, but she decided to move on foot instead, thinking that the horse would get dragged into her battle against the golem later.

“Well then, let’s recover your stamina first. If you don’t fight in your best condition, it defeats the point of calling you all the way here. Golem, use Universal Healing on Noire!” (Lingland)

The golem completed the rune in an instant, and Noir’s stamina was completely restored.

“Are you ready? Well then, let’s commence the final experiment!” (Lingland)

“First of all, Shield!” (Lingland)

While Lingland was still giving instructions to the golem, Noire has completed the rune for Ice Lance spell. The spears made of ice flew towards the golem at high speed. However, they were shattered into pieces just before touched the golem’s body.

“Kukukuku~ No attacks would pass through Golem’s defense magic! Golem is the world’s strongest wizard after all! Now then, let’s show her what the real attack is like! Fireball!” (Lingland)

Maybe the golem can’t attack without the instructions from Lingland?

The rune’s drawing speed is amazing, but as long as I hear the instructions too, I can counter it!

Noire made an ice wall appeared in front of her. This time, she used five times magical power she used to create an ice wall during the practical test, on it.

Even so, immediately after the fireball was completed, the ice wall in front of her began to melt with tremendous speed. The diameter of fireball that the golem created in the sky was over than 50 meters. 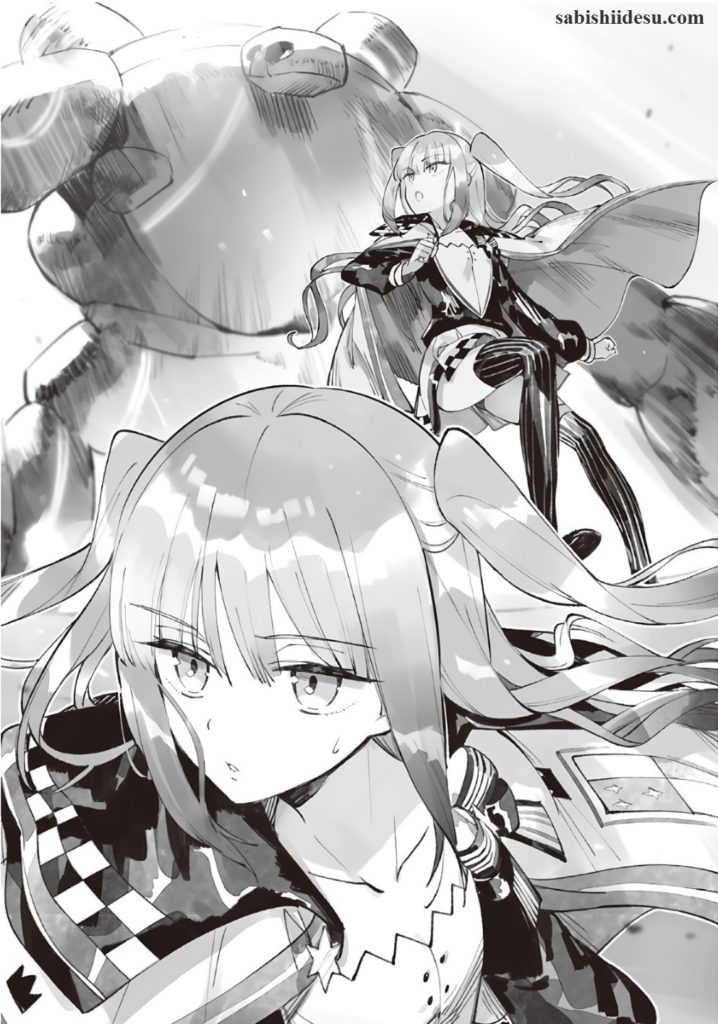 My magical power will be consumed in vain at this rate….

I have to use all my remaining magical power in the next attack and bring this battle to end. Otherwise, I really have no chance of winning.

Noire used up all her remaining magical power to create a giant ice spear.

“Please, pierce through it….” (Noire)

The giant ice spear was released towards the golem. However, it was also shattered to pieces without touching the golem’s body.

“You really have no learning ability! I’ve told you before that no attacks would pass through Golem’s defense magic!” (Lingland)

Lingland certainly said that before. However, Noire didn’t think that the attack which she put all her magical power into it, couldn’t even leave a scratch on the golem.

It’s hopeless…. There’s no wizard in this world who can defeat such a monster….

Noire who ran out of magical power, fell on the spot. Seeing that figure, Lingland laughed happily.

“The first successful example of my experiment — Noire, she has no hands nor legs against it! Strong! My golem is the strongest! It’s truly a masterpiece!” (Lingland)

“I have no use of Noire anymore! Kill her, Golem! When it’s over, let’s kill all the member of hero party! Kukukuku~ Who should I kill first? Maurice? Coron? No, the first one should be Phillip! Anyway, we will massacre them all, and let the whole world know that my golem is the strongest wizard in the———” (Lingland)

The golem and the laboratory were split into two.