“Ash, I’m going to go to the town after this. Do you want to come along?” (Maurice)

While I was cleaning up after breakfast, Master said that to me. I would usually come along, but there was something else I need to do that day.

“If you want something, I will buy it….” (Maurice)

“No. I don’t have anything I want in particular right now.” (Ash)

I really want a magic wand, but I could see that request being rejected. According to Master, I’m still immature so it’s still too early to have a magic wand.

I will train my body day and night until the day when I can be recognized by Master!

“I will be back before the sun goes down. Well then, I leave the rest to you!” (Maurice)

I saw off Master. Then, after finished cleaning up, I went out the house.

I was standing outside the house surrounded by overgrown trees.

“Okay, I have to finish it before Master comes back!” (Ash)

Today is Master’s birthday. He has always been taking care of me, and it’s a good chance to repay it.

Then again, since all I can do is cooking, I decide to prepare a big feast to celebrate it. I don’t have money but the food can be procured from the forest.

“I hope this will make him happy.” (Ash)

It’s been seven years since I lived in this Demon Forest. I spend most of my time training outside, so this forest is already like my backyard. I always know where I am, and never get lost.

I went deeper into the forest, spending a few hours collecting mushrooms and flowers that could be used for cooking.

“I have gathered so much, but…. I can only make sautéed mushrooms with these ingredients.” (Ash)

To make a feast, I have to prepare dishes that are more luxurious than usual. I can go to the river, but meat is more delicious than fish. If only I could find a wild boar….

When I was walking through the forest in search of meat, I heard a sound like that of a blackboard being scratched. The Distortion of Time and Space occurred.

“Good timing. I hope it’s a monster that can be eaten.” (Ash)

I ran towards the source of the sound. The space cracked and a monster came out from it. Gigantic body covered with crimson scales, sharp nails, and a big wing. The surrounding trees were crushed as the monster landed on the ground.

“Oh, it’s a red dragon! This is the perfect ingredient for making meat dishes.” (Ash)

The red dragon shook its tail like a whip. The trees were blown away, creating a fan-shaped vacant lot. Next the red dragon opened its mouth and blazing fire coming from it — the dragon breath attack.

“The forest will be on fire if I leave it alone!” (Ash) 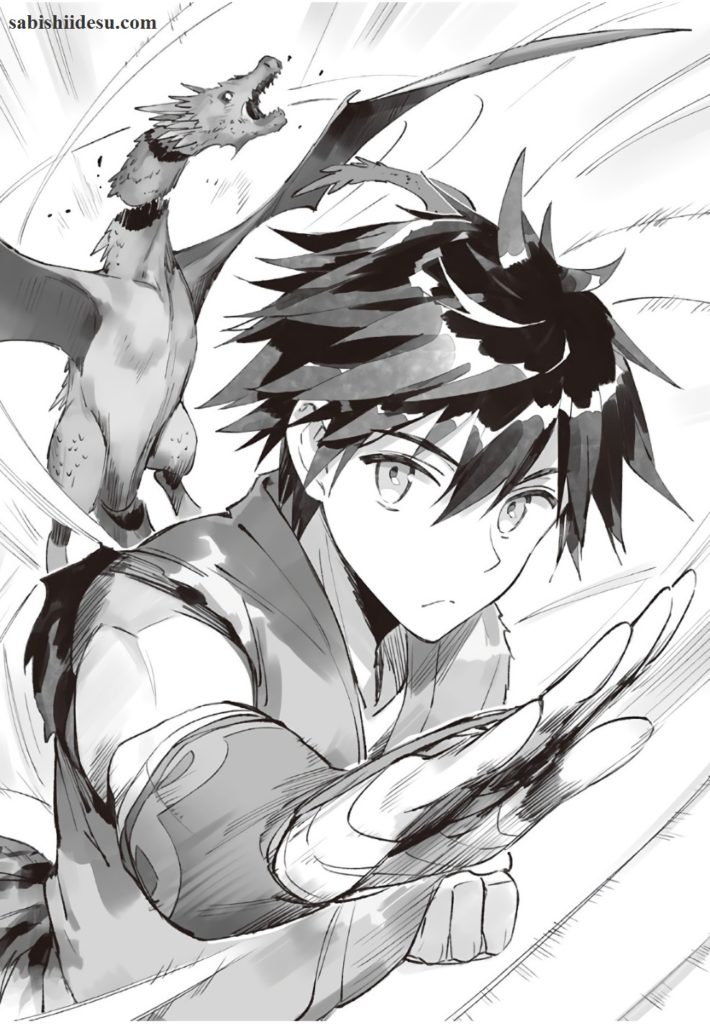 The red dragon died after receiving several Wind Blades attack from me. I cut the meat from the abdomen part of the red dragon into a reasonable size to be brought home.

Even though it’s written in the book that dragon scale is the hardest material in the world, I could easily cut it. Oh well, rumors are always exaggerated after all.

“Good. I can make a feast for Master with this much meat.” (Ash)

I went home after successfully procuring the meat.

The sun was completely tilted when I got home. In the kitchen, I sliced the mushrooms thinly and then finely chopped the flower roots and stems.

The root will produce a garlic-flavored juice when heated. The raw stem is hard, but if I sauté it, it will turn soft after sucking the juice from the stems. I will add some butter to strengthen the aroma. That’s all the ingredients to make Sautéed Garlic Butter Mushrooms.

“The whole house will full of garlic smell if I make it here. Let’s move to the garden!” (Ash)

I assembled the barbecue set in the garden, lit up the fire, and heated the iron plate to melt the butter. Then, when I just finished making Sautéed Garlic Butter Mushrooms, Master finally returned.

“Such a good smells. Is that today’s dinner?” (Maurice)

“Welcome back, Master. There’s more, look at this!” (Ash)

I held the fatty meat in both hands and showed it to Master.

“Today is Master’s birthday. I’ve prepared a feast for you.” (Ash)

Master eyes were gradually getting wet.

I’ve never thought Master would be this happy. I should celebrate his birthday again next year. I hope another red dragon will appear again at that time.

“However, what meat is this? I don’t remember we have such a high quality meat at home….” (Maurice)

“I caught something in the forest.” (Ash)

“You even went to hunt for me…. are you injured somewhere?” (Maurice)

I smiled to Master who seemed worried.

“My opponent was weak. I defeated it using Wind Blade that Master taught me.” (Ash)

Master averted his eyes from me for some reason. It was four years later that I finally understood the reason he did it.