On the way back to Erstania. When I was running on the mountain slope, I tripped over something and fell down.

Normally, such a thing would never happen. However, I just turned back into a three years old boy. I lost my balance because I haven’t used to my short limbs.

I rolled down the mountain sloop with a tremendous speed. I could easily stop the momentum if I wanted it. However, I was a three years old both physically and mentally. I didn’t want to stop because it was fun like an amusement ride.

I kept rolling down the mountain slope for a while. My speed gradually dropped as I arrived on the flat surface.

I stopped rolling and then stood up. There was no particular motion sickness because I had strong semicircular ducts. But talking about the problem, there was my clothes.

I’ve done something so childish and dirtied the clothes from Colon-san. Even though I should be at the age where I stopped playing mud….

Perhaps the Magic Spot has emerged on my body. I want to check it, but this is difficult since it’s located on the butt. I want to get back to the academy as soon as possible, and ask someone to check it.

When I was about to run again, a voice suddenly called me from behind. I turned around and saw a silver-haired woman rushed to me.

Holding a magic wand, the woman stood with her back turned to me, as if protecting me from the skeleton guy in front of her.

[Are you perhaps the strong opponent I’ve been looking for?] (Earth Emperor)

Suddenly, a hoarse voice echoed inside my head.

“Are you perhaps a demon lord?” (Ash)

The color of his cloak is different, but he looks just like Dark Emperor.

[Indeed. My name is Earth Emperor. The one who controls the earth of this world!] (Earth Emperor)

This is convenient. If this guy is overwhelmingly stronger than Dark Emperor, I might be able to grow mentally after fighting him.

[Interesting, really interesting! You didn’t even move an eyebrow after hearing my name! There’s no doubt! You are the strong opponent I’ve been looking for hundreds of years!] (Earth Emperor)

“H-He is just a kid, I’m your opponent! Hey, hurry run away from here—” (Melnia)

[Be quiet! The weak should just return to the earth.] (Earth Emperor)

In the next moment, the silver-haired woman was buried up to her neck. It happened so fast as though she fell into a pitfall. Looking around, I saw several people who had fallen into the same situation as her.

Maybe all of this is the work of the Earth Emperor?

[Naturally. You are not simply buried in the ground. This is one of my magic. You can get out without my permission—] (Earth Emperor)

I plunged my hands into the ground and dragged out the silver-haired woman. I did the same thing to everyone afterwards.

Hmm, this reminds me of the time when I had to dig up sweet potatoes during a study tour.

[To break my magic so easily…. My eyes had never wrong after all! However, you’re no match for me!] (Earth Emperor)

Hearing that, I turned around.

[Impossible!? Why didn’t you return to the earth!?] (Earth Emperor)

[Could it be your body was instantly healed by healing magic?? No, that’s stupid! There can be no healing magic that exceeds my disintegration!!] (Earth Emperor)

Earth Emperor spread his arms towards the heaven.

The soil wrapped around Earth Emperor’s body and then it turned into a western-style full-body armor. Next the soil gathered in his hand, and a giant hammer was completed.

“Wh-What a fearsome show of strength….”

“H-His power is on a different dimension….”

Looking at Earth Emperor who has transformed, everyone trembled and rattled. Some of them even thrown up.

“Fuhahaha! Now it has come to this, don’t expect me to go easy anymore! After you, I will return all mankind to the earth!” (Earth Emperor)

Earth Emperor came to my direction with a huge hammer on his shoulder.

[It’s been a long time since I met a strong opponent like you. To honor this meeting, you shall return you to the earth using my whole soul’s attack!] (Earth Emperor)

Earth Emperor swung down his huge hammer towards my head. *crash* the hammer was shattered and my body was covered by mud. 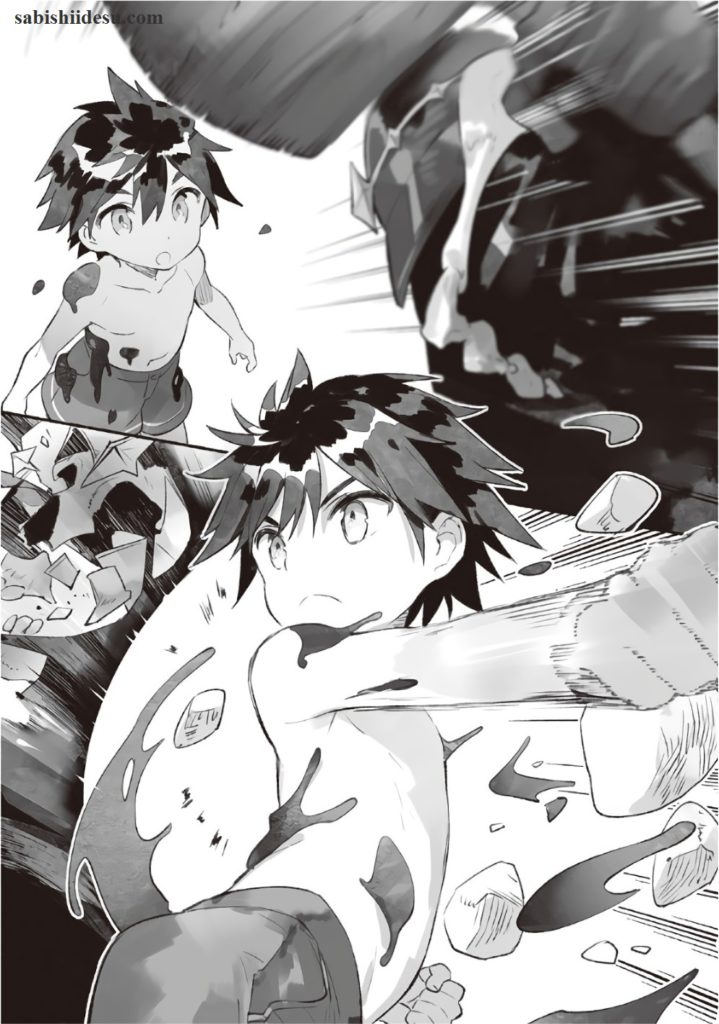 “I have to take a shower when I get back to the dorm.” (Ash)

I wiped off the mud on my body and then spoke to the dumbfounded silver-haired woman.

“Earth Emperor has returned to the earth. Well then, I still have some errand, so—” (Ash)

When I was about to leave, the silver-haired woman stopped me.

Melnia-san and co lowered her head to me.

“Ash-dono! You are the hero who saved all mankind! Please come to the castle with us!” (Melnia)

“Oh, is that true? Then, let’s go back together! Of course, we will prepare the carriage and—-” (Melnia)

Hearing that, Melnia-san and co frozen for a moment.

“Are you planning to go to Erstania by running!?” (Melnia)

“Yes. I’m a student of Erstadt Magic Academy. If you still have a business with me, please go there. Farewell!” (Ash)

I started running towards the academy after saying goodbye to everyone.

I lost a little time, but I will be in time for tomorrow’s classes.

4 Replies to “Saikyou no Butouka V2C5”