Though I ran into a little trouble (demon lord) in the way, I managed to arrive in Erstania when the sun rose. As I walked towards the academy, I saw Noir-san in front of the front gate.

“Good morning, Noire-san. What are you doing this early in the morning?” (Ash)

When I greeted her, Noire-san just stared at me with a flat expression.

Well, it’s normal that she didn’t recognize me at first glance.

“No, Ash is taller. You are shorter and smaller than me.” (Noire)

Having said that, Noire-san took off her cloak and gently put it on my body.

Speaking of which, I’m topless because my upper clothes had been destroyed by Earth Emperor’s attack.

Noire-san teared a ♪crispy on the outside, ♪soft in the middle, ♪melted in the inside, the dreamy melo-melo melon bread she had been holding like her own child into two, and gave one part to me.

“I can’t give you the whole bread. I will give the other half to a friend.” (Noire)

A friend? Maybe she’s referring to me. To think that she wants to share her favorite food with someone voluntarily….

While I was feeling moved by Noire-san’s growth, Effa approached us, running. She seemed to be following my training menu to jog every morning.

“I got involved with a lost child.” (Noire)

Effa titled her head and then hit her fist against her palm as if came to understanding.

Effa crouched down to match my eye level. Stroking my head, she then asked my name while smiling. Effa was used to handling children because she has a lot of little sister. 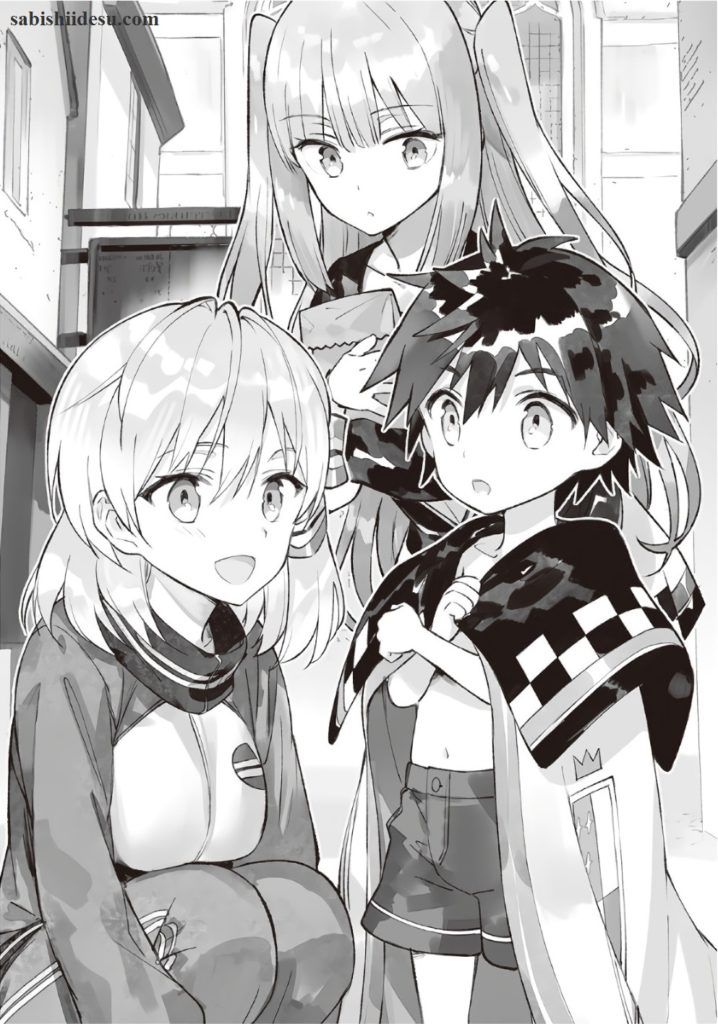 “Hahahaha. I would expect no less of Master. Even such a small child longs to be like him.” (Effa)

Effa looks so happy. I don’t want to spoil her happy face, but I have to solve this misunderstanding soon.

“I’m the real Ash. Look, we always do martial arts training in the square.” (Ash)

“Oh, were you watching secretly because you wanted to take part in the training?” (Effa)

“I did take part in the training!” (Ash)

“Yes, yes. You could ask Master to make you his disciple when you’ve grown up!” (Effa)

It’s useless. Effa is completely treating me as a lost child.

This flow, I’m sure Felmina-san won’t recognize me too….

Felmina recognized me at first glance.

I nodded and looked at Felmina-san’s face.

“I-I knew it from the beginning. I’m just teasing you!” (Noire)

I didn’t know whether what Noire-san said was true or not. On the other hand, Effa seemed about to burst into tears.

“For not realizing the identity of my own master, will I be excommunicated…?” (Effa)

“I won’t excommunicate you. I’ll take care of you until graduation. Let’s practice together again from today!” (Ash)

Effa wiped her tears and suddenly getting all fired up.

After that, I headed to the principal office to report of what had happened.

When I was walking along the corridor with everyone, we met Erina-sensei.

Hearing that, Erina-sensei was stunned.

Erina-sensei sighed with a tired face.

“You never cease to amaze me! If it’s the principal, he won’t be coming to the school for a while to attend an urgent matter.” (Erina)

Urgent? I wonder if it’s related to Earth Emperor. I’m not unrelated, I’m sure I will be called eventually. Let’s give my report when the time comes.

“I wonder what is this urgent matter all about.” (Effa)

“Principal Phillip is also the king of this country. I’m sure it’s an important meeting!” (Felmina)

Effa and Felmina were chatting happily.

Because it will turn into a fuss if they know about the advent of demon lord, it’s better not to say it.

I parted with everyone and was naked inside my room. I stood with my back facing the mirror to check my butt.

I was shocked. I thought I had grown mentally when I graduated from playing with mud, but the Magic Spot did not appear.

The time limit is 3 months, I still have time…. I have to actively participate in events that seem to be able to make me grow mentally and make the Magic Spot appear!

The trouser was safe but my shirt was destroyed. I tried to wear something from my wardrobe but they were too big.

There must be a clothing store or two that opens early in the morning.

I grabbed my wallet and left the dormitory.

4 Replies to “Saikyou no Butouka V2C7”