Chapter 9 – The three disciples of the heroes

Before the morning classes began….

“Nice to meet you, everyone. My name is Aina Vermillion. I will be acting as the principal for a while from today. Please treat me well!” (Aina)

The classroom was in turmoil when the woman who came in with Erina-sensei introduced herself. Aina Vermillion was this kingdom’s princess, and the same time, she was also the supreme commander of the Erstadt Magic Knight Order.

From her voice and her dress, there’s no doubt that she is ‘Ai-chan’ I met a while ago. In addition, her hand is holding a familiar paper bag from the clothing store. If my prediction is correct, there should be ‘those’ inside it. I have a bad feeling about it…. 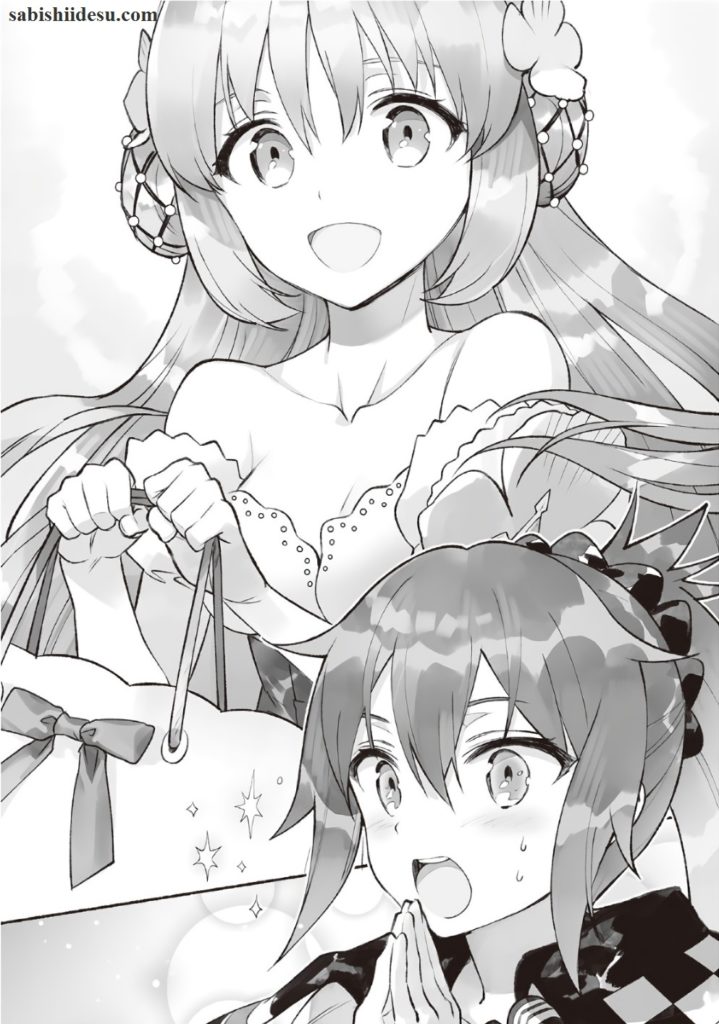 Felmina-san was also making a big fuss about the appearance of a celebrity inside the class. For Felmina-san who wanted to join the Magic Knight Order, it was equal to seeing the goddess.

Felmina-san asked so while continuously shaking my shoulder.

Yeah, good question. I wonder what should I do now….

Immediately, Felmina-san stood up and bowed to Ai-chan who stopped in front of us.

“Hermisch…. Oh, do you mean the vice-captain of the Northern Subjugation Unit? I’ve heard a lot about your father from Melnia. She always says that Hermisch-dono is a very dependable person.” (Aina)

Melnia? Northern Subjugation Unit? Maybe Felmina-san’s father was among the people I pulled out of the ground.

“It’s honor to be evaluated highly by Melnia-sama! I will also work hard to become a strong and a brave female wizard like her!” (Felmina)

Felmina-san couldn’t hide her happiness because her father was being praised.

Melnia-san tried to help me even though she was in front of a demon lord. The wizard who confronts the overwhelmingly strong enemies — that’s exactly what Felmina-san longs to be.

Then, Ai-chan turned her eyes at me and smiled.

The classroom stirred by that remark.

Ai-chan placed her index finger on her lips and winked, adding oil to the fire. The classroom was getting more and more noisy due to Ai-chan’s meaningful remark.

“There’s something I’d talk in private with you. Could you please come to the principal’s office with me?” (Aina)

Ai-chan said so with a serious face.

When I was about to leave my seat, Felmina-san grabbed my hand tightly.

“Umm, well…. I will be very indebted to you, so…. If possible, could you get Aina-sama’s autograph for me…?” (Felmina)

I answered Felmina-san and left the classroom.

“First of all, please accept this as a token of our acquaintance.” (Aina)

When we arrived at the principal’s office, the first thing Ai-chan did was presenting the paper bag to me.

“It’s just something trivial…. No, calling it trivial would be rude. This is something you’ve chosen yourself after all. Even so, I’ve never thought that I would meet you in such places. Maybe this is some kind of fate.” (Aina)

Ai-chan put all her feelings to choose this present for me. There’s no reason for me to not feeling happy. However, these are girl’s clothes and panties….

It’s embarrassing to dress up as a girl, but this also can be a good chance to grow up mentally. Overcoming the sense of shame may result in spiritual growth and the appearance of Magic Spot. Considering that, this actually the best present I could hope for.

“Now then, I would like to thank you on behalf of the world. Thank you for defeating Earth Emperor.” (Aina)

“Pl-Please raise your head! It was not something great. I just punched him once.” (Ash)

“However, to be able to defeat Earth Emperor with a single punch, you must have spent a tremendous amount of efforts to train yourself. I should not disregard your efforts, and as the princess of a country, I must reward you with something suitable.” (Aina)

“I have already received the reward.” (Ash)

I held up the paper bag.

“That’s just a souvenir. Is there else something you want? I will prepare anything using my authority as a princess.” (Aina)

What I want the most is “magic”. But even if she’s a princess, I’m sure she won’t be able to prepare it.

“In that case, please give me your autograph.” (Ash)

“Yes. It’s something that only you can prepare after all.” (Ash)

“You really have no desire, huh…. Okay, I understand.” (Aina)

“I understand. I’ll write with all my heart.” (Aina)

Ai-chan wrote her autograph on handkerchief and then presented it to me. After that, I returned to the classroom and handed the signed handkerchief to Felmina-san.

Felmina-san was crying in joy while embracing me.

From the 3rd  person’s POV

When Maurice was having dinner inside his house at the Demon Forest, Phillip suddenly appeared in front of him.

“You surprised me! Contact me in advance if you want to use teleportation!” (Maurice)

Having said that, Phillip took a nearby seat. Then, while still grumbling, Maurice began to prepare meal for Phillip too. Maurice returned to his seat and looked at Phillip on the opposite direction with a serious expression.

“So, what are you coming for? I’m sure you didn’t come to have a small talk with your old friend….” (Maurice)

“You caught up fast. Well, I will tell the concrete stories after Colon arrives.” (Phillip)

Even though she was the world’s number one pharmacist and a wizard who excel in dark magic, Colon couldn’t use teleportation like Phillip. With the exception of Ash, it will take at least a week to reach the Demon Forest from Lamnyar.

“Are you going to stay here until Colon arrives?” (Maurice)

After beating each other in small talk, Maurice got down to the main subject.

“To call up the founding members of hero party, does it mean the Day of End <Ragnarok> is getting closer?” (Maurice)

“You are still sharp as ever. Yeah it is, unfortunately. Well, anyway, I will tell you the details after Colon arrives. However, there’s only one thing I can say right now….” (Phillip)

Phillip stared at Maurice with a stern expression.

“You, me, and Colon…. The time to gather the disciple we have raised has finally come.” (Phillip)

3 Replies to “Saikyou no Butouka V2C9”