Chapter 10 – The memories of her previous life

Ten days had passed since I became a three-years-old kid again. Like usual, I was giving martial arts lesson to Effa at the square after the school.

“Okay, let’s do a review before we call it a day. Try to repeat what I’ve taught you today!” (Ash)

It has only been about an hour since we started the training. However, the day was getting shorter recently. I was afraid Effa would injure herself if we continued training in the dark. Therefore, I decided to round it up sooner. 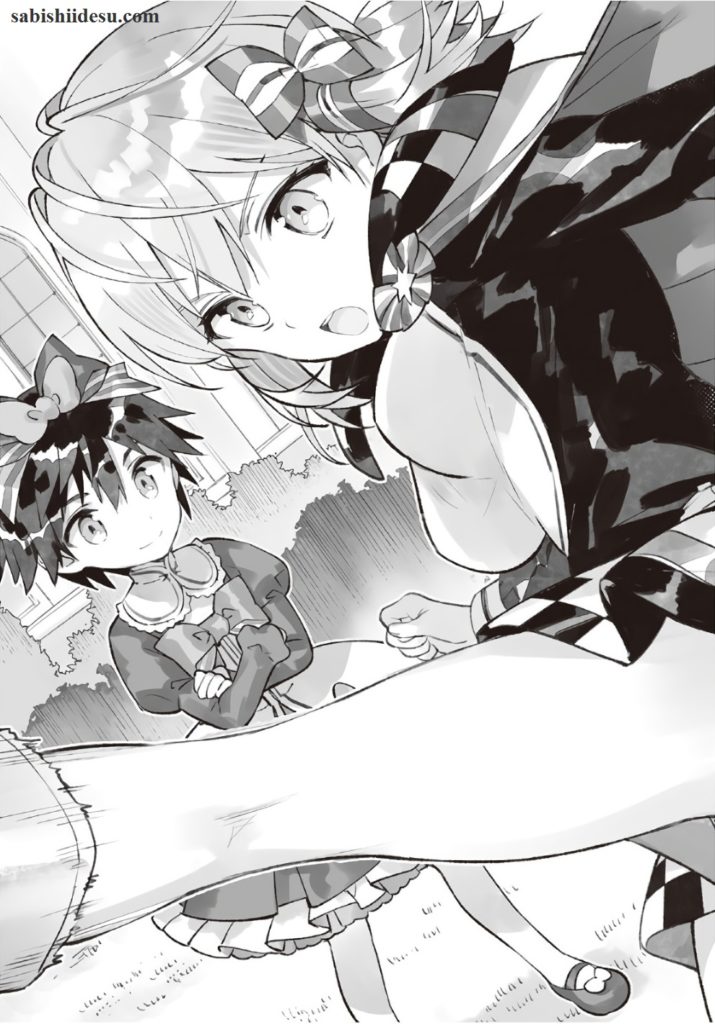 Effa threw a right punch, a left punch, a high kick, and…. fell on her butt. It was still far from perfect, but she has made quite a progress compared to before. When we just started, she couldn’t even make a proper posture after all.

“Good. You have made a good progress.” (Ash)

I’m glad to see my disciple has made a progress with her training. On the other hand, I haven’t made any progress myself. Even though I’ve overcome the shame of wearing a princess-like outfit like this, there’s still no sign of Magic Spot will appear.

If it’s still not enough, maybe I have no choice but to use the ‘ultimate weapon’ I keep hidden until now. Well, it’s better if I don’t put too much expectation on it. I have to start thinking of a way to encourage mental growth other than by overcoming the sense of shame, too….

“Oh, sorry. I have some business to take care of tomorrow.” (Ash)

“Are you planning to go out somewhere?” (Effa)

“Yeah. Tomorrow we have a day off, right? I’m planning to go shopping in the morning, and go to my master’s house in the afternoon.” (Ash)

Tomorrow is Master’s birthday after all. The distance from this place to the Demon Forest is more than 100 km. However, to celebrate Master’s birthday, I would even rush to the other side of the world.

“If it won’t be a bother, I’d like to accompany you shopping. I think I should start looking for souvenirs for my little sisters, too.” (Effa)

After making a plan for tomorrow, I headed straight to the library.

When I arrived at the library, Noire-san was already there with some textbooks spreading on the desk in front of her.

“I’m sorry. I was discussing something with Effa.” (Ash)

I took a seat next to Noire-san.

“I want to become smarter. You are the only one I can count on.” (Noire)

Noire-san said so full of motivation.

Noire-san wants to stay in the advanced class. Therefore, she asked me to help her study in order to get a good score in the written test. Noir-san said her goal was 30 points.

“Before we start, let’s review what we have studied before. First of all, please draw all the runes from yesterday.” (Ash)

I shook my head towards Noire-san who was staring at me.

“I see. So, what are the correct answers?” (Noire)

I drew the correct runes on the notebook.

Noire-san nodded after comparing the right and wrong runes.

“You are right. I lost my confidence….” (Noire)

“Don’t give up! There are still three months before the promotion test. I’m sure you will manage it.” (Ash)

“You are really reliable, but…. I’m already tired.” (Noire)

“Hey, it has not even been five minutes yet.” (Ash)

However, if she’s really tired, I guess it’s fine to take a break. It’s a waste of time if you study when your head’s tired after all.

“Speaking of which, does Noire-san have the memories from your previous life?” (Ash)

I asked that question when we were taking a break.

Well, Colon-san also said that such memories would fade as they grow older. In Noire-san’s case, perhaps she has completely forgotten the memories of her previous life.

“Sorry for suddenly asking such a strange question….” (Ash)

“No, I don’t mind. This is the second time I’ve been asked that question after all.” (Noire)

I was surprised hearing Noire-san’s words.

“The second time!? Could it be the first person who asked that question is Colon-san?” (Ash)

Lingland seems to have done various researches to create the world’s strongest wizard. In the process, he might have reached the same theory as Colon-san too.

“Did he ask the exact same question as me?” (Ash)

“He asked me whether I still remember the memories of my previous life or not.” (Noire)

It’s similar to my question, but at the same time, it’s also a completely different question. To me, it sounds like the memories of Noire-san was erased somehow.

Noire-san picked her pen and looked at me while making a serious expression.

It’s still bothering me…. There are many things to think about, maybe I should investigate it further next time. Let’s concentrate on teaching Noire-san for now.

“Okay, let’s review it once more. Draw all the magic runes from earlier!” (Ash)

It’s all wrong. For Noire-san to get 30 points in the written test, I guess it’s going to be more difficult than I expected.