Together with Noire-san, I was sent to the haunted house by the transfer magic embedded in the admission ticket. Upon arrival, Noire-san immediately hugged me from the front, blocking my field of vision. 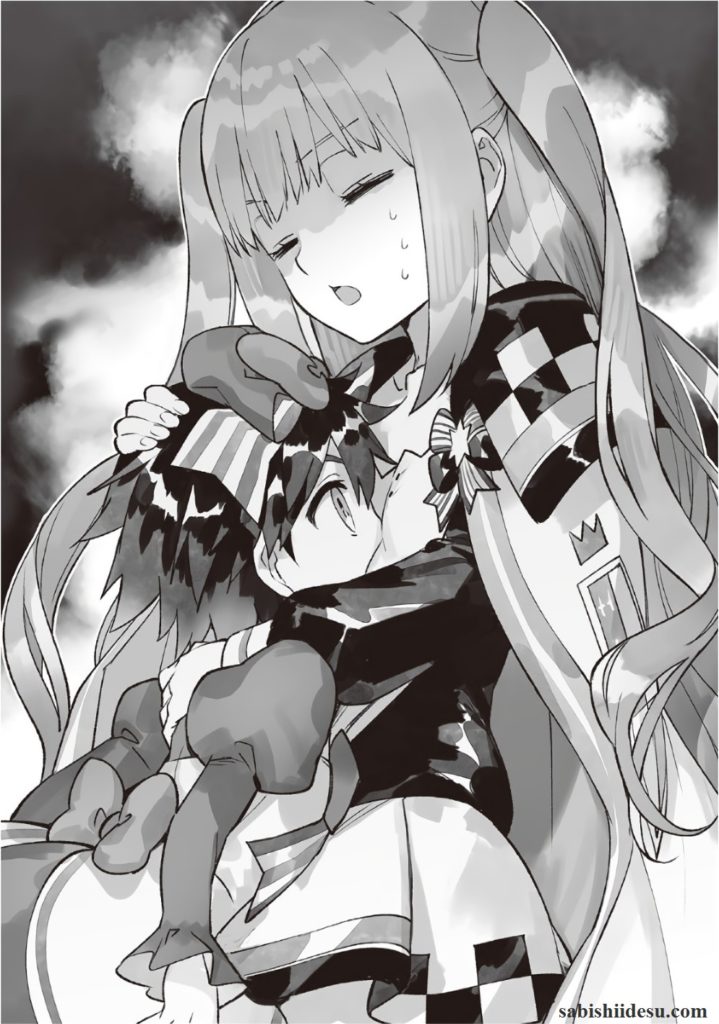 I understand that Noire-san is scared. However, we won’t make any progress at this rate.

I asked Noire-san to let go of me and looked around the dimly lit room. Blood-covered equipment was rolling all over the place, and a skeleton was laying on the bed.

I thought that was a demon lord for a moment. However, this place is a haunted house, so it’s not strange to see a skeleton or two around.

To avoid seeing scary things, Noire-san asked while keeping her eyes downwards. She didn’t see what was in front of us.

“I guess we should follow the instruction written over there.” (Ash)

The instruction is written on the wall in big and bloody letters. Apparently, defeating the evil spirits somewhere in the hospital will clear the game and transfer us back to the classroom.

The method to defeat the evil spirits is by revealing their true identity. They appear as a silhouette, and disappear if we guessed their identity correctly.

Noire-san tried to clear the game by guessing randomly.

“Even if the answer is correct, it won’t clear the game unless we say it in front of the evil spirits in question.” (Ash)

If we break the admission ticket, it seems the transfer magic will be activated and we will be transferred back to the classroom.

I want to help improving the quality of haunted houses as a member of the class, and above all, I don’t want to run away. If I run away here, I won’t be able to grow mentally.

Grabbing my shoulder tightly, Noire-san said so with a resolute face.

Watching Noire-san nodded vigorously, I put my hand on the doorknob. *click* — there was a noise of some kind coming from behind. Turned around, I saw the skeleton on the bed slowly raising its body.

Did it move because I touched the doorknob?

Noire-san took out her magic wand and started drawing a rune to cast Ice Lance spell.

If Noire-san uses her magic here, the entire haunted house will get destroyed too. There’s only one week left until the cultural festival, we won’t make it in time if we have to re-build it from the scratch

“Look, even if you don’t destroy it, the skeleton won’t attack you!” (Ash)

The skeleton was made by the production team members, one of the haunted house’s attraction. I don’t think it’s going to attack the guests. In fact, the skeleton doesn’t not try to get out of the bed. This guy’s job is only to surprise the guest by suddenly moving.

When Noire-san’s complexion has improved a little, we moved to the next room. Entering the corridor, we saw pools of blood everywhere.

“If you fall, your uniform will be dirty.” (Noire)

“It looks good as a haunted house, but this might be a little dangerous.” (Ash)

If the purpose is to surprise, smearing blood on the wall works as well. I better tell the production team when I return.

I walked down the corridor while thinking about such a thing. Took a turn in the corner, there was a big mirror at the end of the corridor. From the mirror, I saw there was a zombie standing behind us.

I and Noire-san immediately turned around at the same time.

“Perhaps a trick of some kind was installed in the mirror….” (Ash)

When we turned back towards the mirror, the zombie from before was already standing in front of us.

My heart was beating like crazy. However, the zombie simply passed by my side staggeringly, and walked away somewhere.

I’m glad because it looks like this haunted house will be a huge success, but looking at the scared Noire-san, I also feel bad. Let’s defeat the evil spirits quickly so that we can return to the classroom!

Following the passage, turned in the corner, we arrived at the operating room.

“There is absolutely something there!” (Noire)

Noire-san whispered in a tearful voice.

I think so, too. However, it’s been a one-way road so far. There were no other doors, and I guess we would have to go through the operating room to reach the goal.

I opened the operating room door. There was a decaying corpse lying on the bed full of blood. His rotten limbs were fixed with belts, and a key was hooked on the fingertip.

I see. I guess we can’t open the door without that key.

I slowly reached out to that key.

The moment I took the key, the corpse suddenly started thrashing around.

It looks like he can’t get up because his limbs are restrained. Still, it’s really bad for my heart.

I opened the door with pounding heart, and we left the operating room. After that, while being surprised by the cry of baby coming out of nowhere, a screaming painting, a skeleton that suddenly jumped out of the corner, a zombie reaching out from the crack of the wall, I and Noire-san walked down the aisle.

I showed a dirty green wrapping cloth to Noire-san. Inside it, there was a skeleton that fell apart.

This guy suddenly jumped out of the corner. I was surprised and punched it out of reflex. The skeleton was blown apart as the result.

“We can repair it using adhesive magic later.” (Noire)

“However, some parts are obviously missing….” (Ash)

I’ve desperately collected the bones that scattered on the floor, but there are obviously some missing parts. The ribs and pelvis are all shattered. Only the skull and limbs are safe.

A skull with limbs attached to it, huh? Certainly, that’s quite scary. I will ask Effa to attach them together later.

“Yes, we can finally go back after this.” (Noire)

[Evil Spirits Room] was carefully written on the door with bloody letter. As soon as we entered the room, there was a silhouette of something on the curtain. The identity of that silhouette was….