I lost for words when the two demon lords suddenly appeared in front of the school gate.

I could see the image of school gate when I closed my eyes. Perhaps this is being broadcasted live worldwide right now.

Thinking the people around the world was watching my crossdressed figure, I was attacked by a wave of embarrassment.

This is perfect for growing mentally!

“I will attract the demon lords’ attention!” (Ash)

“Only attract their attention? I want you to defeat them if possible….” (Sharm)

“Of course, I will defeat them, but before that…. I will go over there, can I ask you to set a defensive barrier around me and the demon lords later, Keul-san?” (Ash)

This time, I have to fight against two demon lords at the same time. If my opponent is only one, I can use my punch as usual. But to defeat two opponents at the same time, I need to use a double lariat or similar other attacks.

Even then, the possibility of one or both demon lords survived from my attack still exists. If they started to see me as a threat, in the worst scenario, they will fire a big magic to drown or burn the whole city.

In order to avoid that, I asked Keul-san to set a defensive barrier when their attention is focused on me.

“I don’t think my barrier will be able to withstand their attack, but if I put all magical power into it, I can minimize the damage at least….” (Keul)

When the strategy was decided, the voice of demon lords echoed inside our head again.

[Can you see where are we now, Phillip Vermillion? I know that you’re the principal of Erstadt Magic Academy from the report.] (Water Emperor)

[If you don’t come out, we will destroy this academy!] (Fire Emperor)

[If you don’t want your beloved students to be massacred, appear before us now!] (Water Emperor)

I jumped lightly and landed in front of the two demon lords. During the process, my skirt was turned up softly. Thinking the people from all over the world was able to see my animal-printed underwear, my body was getting hot because of too much embarrassment.

[What do you want, little insect? Are you going to go against us and become a hero?] (Water Emperor)

[Do you want to die now or die later? I will make a special exception and let you choose.] (Fire Emperor)

I smiled at the two demon lords who rang their teeth happily.

To minimize the damage, to make the two demon lords focusing their attention at me only, and so on. I had various reasons to provoke them. However, somewhere deep inside my heart, I didn’t want to defeat them right away, and I was expecting they would give me a tough fight.

[Fine. I will grant your wish to die right now!] (Water Emperor)

“All the demon lords I’ve met until now, shattered quickly after saying that.” (Ash)

[That sounds as if you saw them die firsthand….] (Fire Emperor)

“Because I did see them die. Earth Emperor would use earth magic to armor himself when cornered….” (Ash)

[Why do you know that…?] (Water Emperor)

“Light Emperor, he used <Pursuit Experience (Relive)> to grow stronger than his opponents at the speed of light….”

The two demon finally snapped back to their sense.

I smirked at the shocked demon lords.

“Yeah. I’m the one who killed them. I’m the strong one you’ve been looking for!” (Ash)

In the next moment, the two demon lords burst into laughter.

[I don’t care about Phillip Vermillion anymore! Brat, I will give you a special privilege to be my opponent!] (Water Emperor)

[Hold on! I will be the one who fight this kid! You step aside!] (Fire Emperor)

[What are you saying? I was the one who asked whether this brat wanted to die now or die later! You step aside!] (Water Emperor)

The mood between Water Emperor and Fire Emperor is getting heated up. They’re going to start fighting among themselves at this rate….

“….shouldn’t you use this chance to attack them?” (Sharm)

Looking at the two demon lords who started throwing verbal abuse at each other, Sharm-san said so in a whisper.

Certainly, they’re full of opening. If it’s now, it’s possible to defeat them at the same time using double lariat.

But that’s not good!

I can’t grow mentally even if I defeat them.

My dream is to become a wizard.

To reach that goal, I have to confront the formidable opponents fairly!

In addition, these demon lords are only interested on me alone, and normal citizens have long fled from this area. There’s the barrier that Keul-san set surrounded me and the two demon lords, and Principal Phillip’s special barrier protected the school.

In other words, I’m the only one at risk right now. Even if I fight the two demon lords here, no one will get dragged in.

[I’ve been waiting for this very moment! You step back!] (Water Emperor)

I sighed at the two demon lords who was still quarrelling.

Suddenly, I was interrupted by steam which spewed out of my body.

I thought that my body was getting hot because of the embarrassment, but I was wrong…. The effect of degeneration medicine is wearing off!

My body suddenly grew bigger, and my princess-like clothes popped off. Fortunately or unfortunately, my animal print girl underwear remained intact, but I literary almost naked. Even without looking at a mirror, I knew that I had already back to my original body.

There’s only one thing to do. Confirm the appearance of Magic Spot!

“Wh-Why do I should look at your butt? Or rather, what happened to your body!?” (Sharm)

Sharm-san was puzzled by the sudden change of situation. So that they would be really treating me as a three-years-old, I hadn’t told Sharm-san, Keul-san, even Ai-chan, about the degeneration medicine. Therefore, they also didn’t know that I didn’t have magical power.

Well, Ai-chan may have already heard about my situation from Principal Phillip though.

“Please just look at my butt! Do you see something there?” (Ash)

“Don’t point your butt at me! I can see various things!” (Sharm)

“What do you mean by various things? Please tell me specifically!” (Ash)

“A-Are you actually a pervert!?” (Sharm)

The magic eyeball turned away.

Now that it has come to this, I have to ask those two demon lords to check it. However, that means the image of my butt will be broadcasted worldwide….

Thinking that, a flood of embarrassment attacked my head. When I was still hesitant, the two demon lords finally noticed my change.

[He must have fought Light Emperor in this form. Otherwise, he wouldn’t be able to defeat him. Now then, what should we do?] (Fire Emperor)

[Fufufu. It seems to me that there’s no need to decide who will fight that brat anymore. Since he showed us his true from, we will also show him our true form.] (Water Emperor)

Fusion? Does that mean they will become one body?

“Th-This is bad, Ash-kun! Defeat them before it’s too late!” (Sharm)

Sharm-san told me so in a panicked tone. To fuse meant they would be much stronger. Her reaction was normal.

“You will become stronger after fusing, right?” (Ash)

I want to defeat the demon lords as soon as possible and cut off this live broadcast before the panic spreading further. However, I still don’t know if my magical power has finally been awakened. I don’t want to miss the chance to fight formidable opponents.

[If we fuse, we will be overwhelmingly stronger than now.] (Water Emperor)

[Originally, the seven demon lords could fuse together to become one supreme being. However, because of you, there are only the two of us left.] (Fire Emperor)

[But of course, even if it’s only the two of us, our power will be far surpassed you!] (Water Emperor)

“Wh-What are you doing? Hurry defeat them!” (Sharm)

“Did you lose your mind? The world’s survival is on the line here!” (Sharm)

What Sharm-san said is right. However, I’m also putting my dream on the line here. I won’t give up on one or the other. I will defeat them become a wizard!

“Please be assured. I’m sure I can defeat them!” (Ash)

Sharm-san’s words were interrupted by Ai-chan’s who seemed out of breath. Following her, Effa, Felmina-san, Noire-san, Nina-san, and may other students arrived in that place.

“This world would have already been long ruined without Ash-san. Let’s trust him and respect his will!” (Ai-chan)

“No matter what people say, I believe in Master’s decision!” (Effa)

“Until you successfully defeated the demon lords, I won’t go sleeping.” (Noire)

“L-Look, Ash-kun! I’ve collected the ingredients. Let’s make the Power Drink together when it’s over!” (Nina)

My important people are cheering on me. They came here in spite of the danger. In order to protect everyone and fulfill my dream, I promise I will defeat the fused demon lords with this hand!

[Fine! We will show you the true strength and the true fear!] (Water Emperor)

After a moment of break, Water Emperor and Fire Emperor crossed their shoulder together.

Shortly after that, a magic circle emerged at the feet of two demon lords, and began emitting a dazzling light. Inside the dazzling light, the two silhouettes came together and became one. While wondering what kind of monster would come out, I kept staring into the light without blinking an eye.

“The air is trembling….” (Felmina)

“I’m dizzy…. To think that Ash-san has been fighting such a monster all this time….” (Aina)

The radiance of the magic circle was gradually lost, and on that spot — there was a skeleton with red and blue vertical striped cloak.

[My name is Rainbow Emperor.] 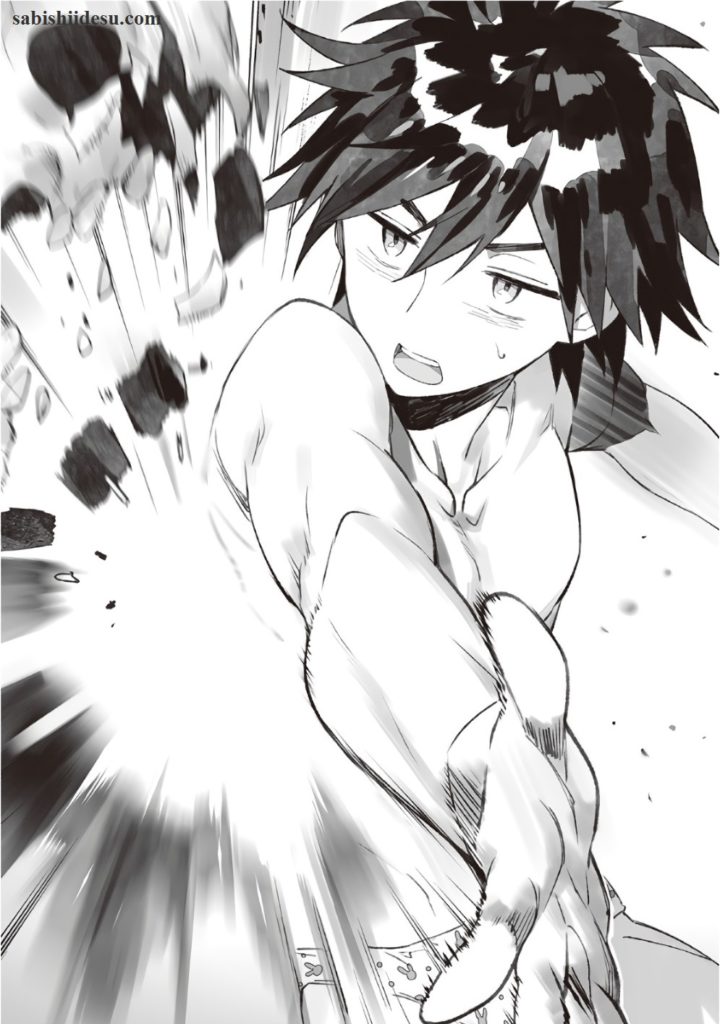 I slapped Rainbow Emperor’s cheek while throwing a retort. His skull was shattered to pieces.

What should I do with my expectation?

What should I do with the determination of everyone in this place?

What should I do with my feeling of embarrassment?

Don’t talk big and die in one strike, dammit!!!

While I was screaming in my heart, Rainbow Emperor who had lost his head, collapsed on the spot. There was no further movement. He has completely dead.

“H-He did it! Ash-san has defeated the demon lords! The world has really been saved now!” (Aina)

Shortly after Ai-chan declared so, cheers were raised from all over the city.

My body was lifted, and tossed up high by people around me.

Let me cover my body with something at least!

I wanted to shout such words, but the atmosphere didn’t allow it.