When Yashiro deliberately leaked out such words, those men stood up all at once and then glaring at him with a scary face.

Umm, excuse me… That’s scary…. Could you guys stop making such a face?

“Oi boy, don’t spout nonsense! Or else, I will turn you into a frog!”

To Yashiro’s provocation, the man who was made fun by his friends earlier retorted as such.

I simply stated I could punch him not defeat him, though.

“Well, maybe it’s impossible for the people who were chickened out and escaped here.”

“Well, calm down. If I feel like it, I can beat him and come back here intact right now.” (Yashiro)

“Houu… Then, why don’t you show it to us? We’re talking about beating Goffredo, not that uncle next to him, alright?”

Hmm, I wonder if he persistently repeated the words in order to leave a proof in the Conversation Record.

I see. He seems to be that kind of person who becomes anxious if the other party doesn’t repeat their words clearly.

Does this mean word scams are quite popular around here?

Interesting, but I hope you don’t compare me with the amateurs who waste words uselessly.

Fraud is about exploiting the other party the when they think “I won’t be deceived”.

“I will beat Goffredo!” (Yashiro)

Those men leaked a voice of admiration when Yashiro proclaimed full of confidence. Listening to their conversation, the dog-eared waitress rounded her eyes.

Oh, getting all nervous now?

“Then, go beat him right now, immediately, this instant!”

The man whose seat was forcibly taken by Goffredo approached Yashiro while getting all worked up.

He seems unable to accept it when I said I could beat Goffredo while he could only run away with his tail between his legs.

Uncle, a short-tempered person is an easy target for fraud.

“Before that, how about we make a bet? I don’t want to do it for free, after all.” (Yashiro)

The four people in front of Yashiro got on board.

“How much money do you bet on?” (Yashiro)

“Sigh…. a bunch of poor losers who are all talk. This is why you were underestimated. You guys should just live in the shade for the rest of your life. Oh, how about moving to wetlands? That place suits you all.” (Yashiro)

The men who were provoked handed their money to Yashiro in advance.

“Hey, waitress. How about you?” (Yashiro)

“Come on, don’t be like that! If I beat him, would you please give me a glass of grapefruit juice for free?” (Yashiro)

“Is that all? Hmm… Well… He’s always bothering the other customers whenever he comes… Fine, if you beat him, I will treat you a drink.”

Thus Yashiro got a free drink ticket and 13,000 Rb cash. He started walking towards Goffredo who was sitting on the counter seat. There was no other customer sitting there because afraid of him.

The pitiful master who couldn’t escape from the counter, shrunk his body as small as possible, so as not to attract his attention.

The chair made a creaking sound as Yashiro sat on it.

“What!? Do you want to complain?” (Goffredo)

Immediately asking if I wanted to complain, he seems to be aware that everyone has a complaint or two against him.

Oh well, I didn’t come to pick a fight.

I’ve come to talk about business.

“Yeah, it will be whether I can knock you out with a single punch on the face….” (Yashiro)

“Hahahaha! You’re going to punch me with those skinny arms of yours!? That’s not even funny! Such a thing isn’t going to be a bet!” (Goffredo)

Yup, it looks good so far.

“We would never know before trying it.” (Yashiro)

“You can back off if you aren’t confident.” (Yashiro)

Goffredo pounded his hand on the top of money hard, as if he held a grudge against the counter itself.

It’s scary! He won’t hit me back by reflex, right? 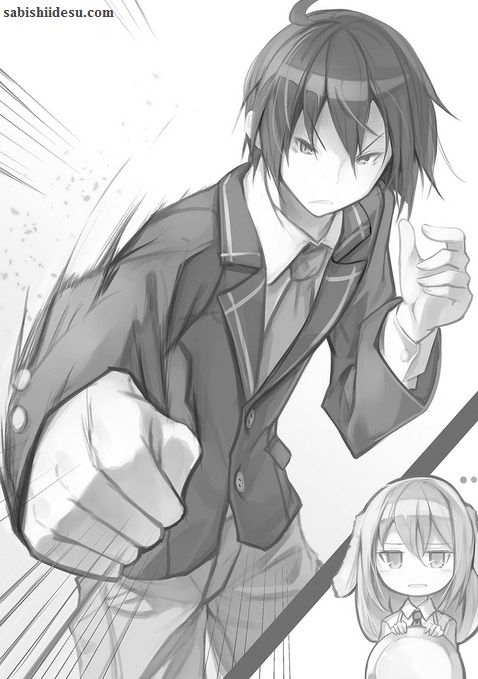 Yashiro pulled his right punch to the back and then shot it straight to the right cheek of Goffredo while putting his own body weight to it.

A loud punching sound could be heard. No, it was a crashing sound.

My fingers! The roots of my fingers are broken! I’m sure of it!

This seriously hurts like hell! I want to cry!

Goffredo was surprised with his eyes wide open. It seemed the punch was much stronger than he had anticipated.

Said that much, Yashiro left the counter seat in hurry. There was nothing to speak any further and he wanted to get away from that place quickly.

Still looking at Yashiro with his scary face, Goffredo seemed unable to comprehend the situation. Someone suddenly approached him, betting as much as 10,000 Rb of money, punched him on the face, and then just left.

“He looks weak, but he’s actually quite strong.”

“He must have thought that he had a chance of winning against me.”

“Otherwise, he wouldn’t challenge such a reckless game.”

………… and so on. His head must be filled with such thoughts right now.

Yashiro was welcomed by dissatisfied faces of the uncles when he returned to his seat.

“What? I said I would ‘beat’ Goffredo. Haven’t I done it already?” (Yashiro)

All I said is I will beat him, not defeat him.

I managed to do it perfectly, so where’s the problem?

With a thump sound, the dog-eared waitress placed a glass of grapefruit juice in front of Yashiro.

“You certainly did beat him on the face, but…. somehow…. I just couldn’t get rid of this complicated feeling from my chest.”

“That complicated feeling will make you into an adult.” (Yashiro)

You’ll be betrayed by your expectation, sometimes. Going through this kind of experience will make one into an adult.

Yashiro enjoyed the fresh grapefruit and left the tavern.

I want to eat dinner here, but it doesn’t seem I can enjoy my meal in this kind of atmosphere.

Oh well, with this I managed to secure the money for my lodging tonight.

3.000 Rb, the amount of other world money I earned for the first time.

I can spend the rest of the day at ease.

From this moment, my other worlder life begins.

I’m sure I can have fun in this world.

Walking on the main street while thinking about the plans for the future, Yashiro’s train of thought was interrupted by a call from an unexpected figure.

Looking carefully at the owner of that familiar voice…

“I’ve been looking for you, Customer.”

Standing in front of Yashiro, was a girl from the dilapidated restaurant — Hidamari-tei, where he dine-and-dashed last night. His heartbeat increased and his breathing turned chaotic.

Furthermore, I clearly lied to her….

She can turn me into a frog if she want it….

Chills run down on Yashiro’s back.