Beautiful silver hair, clear eyes like a jade, and a well-shaped nose — an otherworldly beauty that made her looks like a fairy or an elf from the picture book…. No, wait, maybe she really is an elf. I mean, her ears are pointed.

“Good morning, Ginette. By the way, are doing some kind of a game?”

“Yes. Yashiro-san is teaching us an interesting game.” (Ginette)

“Yashiro-san? Do you mean him?”

“Yes. He is Oba Yashiro-san. He will be helping me at the restaurant from now on.” (Ginette)

“Helping at the restaurant, I see….”

The beautiful Sister put a finger on her thin jaw and stared at Yashiro intently.

Somehow, being stared at by a cool beauty like her makes me kinda nervous…. I feel a little cold impression due to her almost unchanged facial expression. If this person gets angry, I’m sure it will be very scary.

“Then, is this where I should line up?”

“Yes. Let’s line up together!” (Ginette)

Oh, I got it. This beautiful Sister seems to be on the same level with Ginette….

Do you understand that there will be various unavoidable incidents if I do this to the two you too?

“Oh my, is this game only for children?”

“The adult will be charged separately.” (Yashiro)

You can still do it even without money, though…. But of course, you won’t complaint if I touch various places on your body.

“Then, I will give up. Unfortunately, we have no such a financial leeway here.”

The beautiful Sister easily withdrawn after making such a gloomy statement.

I feel like I just lost a profit for some reason.

“My name is Bertina. I’m a Sister at this church.” (Bertina)

The Sister named Bertina offered her right hand and asked for a handshake. Yashiro accepted her hand.

Ginette had told her my full name, so I guess it’s fine to omit it.

Hearing that, Bertina put a tremendous strength into her grip and then squeezed Yashiro’s hand. 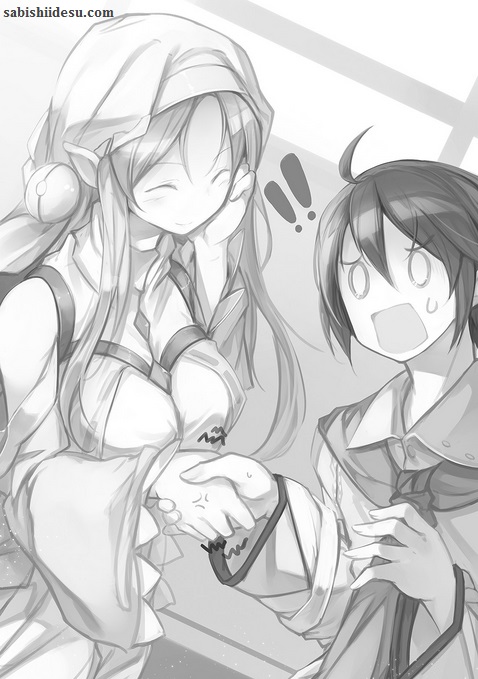 “…….. to call the someone without using honorific on the first meeting, what kind of education do you have? In addition, I haven’t heard your name directly from you.” (Bertina)

If I was a fish, all the bone inside my body would have been broken already. Scary…. This person is super scary…!

“Sister is normally very gentle, but she’s very strict about manner and really scary when gets angry.” (Ginette)

Ginette really hates me. That kind of thing, tell me ahead of time, dammit!

“Well then, Ginette. I’m sorry, I will be counting on you again today.” (Bertina)

“Yes. Everyone, please help me!” (Ginette)

The children responded cheerfully to Ginette, and pulled the cart inside.

Everyone is going to prepare the breakfast, so now is a good time.

“Bertina-san, can we talk for a bit?” (Yashiro)

After confirming that Ginette and the children went into the church, Yashiro opened his mouth.

“Do you know Ginette well?” (Yashiro)

“Yes. I know her since she was a child?” (Bertina)

“Then, do you also know where she lives?” (Yashiro)

“The restaurant that her late grandfather left behind, right now that girl is running it…. but the management doesn’t seem good.” (Bertina)

Facing Bertina who kept her cool expression, Yashiro said it right to the point.

“The food donation, I’d like to stop it.” (Yashiro)

“Ginette is not in an economic situation where she has a leeway to donate to others. The chairs in the shop are all rickety, and the food ingredients she could purchase are only the cheap and bad one. Her life will never change to the better at this rate.” (Yashiro)

“Sooner or later, she will collapse from overworking.” (Yashiro)

“That’s what I’ve been worried about for a long time.” (Bertina)

“Then, will you approve the termination of food donation?” (Yashiro)

“I said that I couldn’t approve it.” (Bertina)

I was astounded. I mean, from the flow of the story, I thought that she would accept it…. but this woman, she’s so self-centered.

“There are a lot of children in the church. If Ginette’s donation is cut off, it will starve them.” (Bertina)

“I know that the children are important, but are you going to keep accepting Ginette’s donation even if she burns her life out for it? That’s just too cruel.” (Yashiro)

This woman. Just because you’re beautiful, do you think you will be forgiven for anything?

“I…. a long time ago…. when the grandfather of that girl just died…. I’ve told her that the donation is not necessary anymore.” (Bertina)

Yashiro felt a jolt on his spine when Bertina, with her unchanging expression, was staring right into his eyes.

“If Ginette wishes it, we will accept the termination of donation at any time. This is not something that can be forced onto someone to begin with.” (Bertina)

“However, talking about that girl, maybe….” (Yashiro)

“Such words would never come from her mouth no matter what happens.” (Bertina)

“Despite knowing that, you’re still….” (Yashiro)

“You’re half right…. There’s certainly a part where I take advantage of that girl’s kindness.” (Bertina)

“The other half?” (Yashiro)

“It’s my responsibility as her parent.” (Bertina)

“That girl used to live here. She lost her family when she was a child and have no place to go.” (Bertina)

“Hmm…. No, wait, there was her grandfather, right?” (Yashiro)

“They’re not related by blood.” (Bertina)

Ginette and her grandfather…. are not related by blood…. Does it mean Ginette is an adopted child?

“That girl left this church at the age of twelve.” (Bertina)

She then moved to that restaurant, huh.

“Her grandfather had donated to this church for many years. Just like the current Ginette.” (Bertina)

“Is she inheriting her grandfather’s will?” (Yashiro)

“I guess there’s that reason, but…. Ginette also wants to protect her little brothers and her little sisters here.” (Bertina)

Bertina directed her line of sight at the church and Yashiro followed suit. There, as though she had known it from the start, Ginette appeared from the inside a moment later.

Did this person read Ginette’s action? Or is this an elf’s special ability or something? Or perhaps this is simply a coincidence…?

Bertina responded to Ginette who was waving her hands energetically by slightly raising her hand. After watching Ginette went back into the church, she turned her body around and smiled at Yashiro.

“I’m happy to know that someone is thinking about that girl.” (Bertina)

It’s not like I was thinking about her. I want to protect my base, and I simply can’t stand seeing people wasting money.

“I can’t listen to your wishes unless Ginette has consented, and as a parent, I also don’t want to see the sad face of my daughter.” (Bertina)

Ginette is…. sad? I absolutely don’t want to see it. Because if that happens, it will become difficult to stay at that place.

Ginette made a donation not because she was a generous person. The donation is also her mental support. This exactly because she understands it, Bertina is still receiving the donation from Ginette.

Dammit…! It doesn’t seem the donation can be stopped. More than anything, it’s fatal to antagonize the landlord. I have to avoid it.

Yashiro heard his name was called. Then, when he raised his face…. a gentle white finger brushed his hair.

“If someone like you is by her side, I’m sure that girl can feel at ease too. She would’ve never put it into words, but she must have been lonely living alone there.” (Bertina)

The spacious house with a lot of unused rooms. Over there, she was living alone….

Suddenly, Yashiro remembered the memories from his past. The serenity of the night. The feeling of loneliness when he returned home — the place that he should have got used seeing it, but looked like a different place….

“Please lend your strength to that girl!” (Bertina)

What a straightforward woman. There’s not even speck of doubt in her eyes. However, those eyes are a bit cloudy now. But believing in a con artist, what are you thinking?

“That girl’s head is a little weak, so it will be helpful to have someone with a solid character like you around her.” (Bertina)

The expression of Bertina softened.

“Fufufu~. My daughter is unconditionally cute. She looks like a genius to me.” (Bertina)

“I’m doting her because I’m her parent.” (Bertina)

Her too-perfect beautiful face which giving a cold impression like ice, loosened.

She’s too beautiful to the point it’s cheating. There’s enough power to make her opponents surrender unconditionally before her. She also has such a default cheat-class weapons (boobs) equipped. That’s just unfair….

“Well then, let’s get in. Everyone is waiting.” (Bertina)

“Yeah. I also haven’t had breakfast this morning.” (Yashiro)

I can smell something good from the inside, I guess Ginette is warming up the food.

“The food made by Ginette is delicious, after all.” (Yashiro)

“Yes. I can’t give her anything in return. That’s why, I will happily eat all the food she made.” (Bertina)

Strangely, the theory that I taught to Ginette about receiving something from someone will also make that person happy, it seems that this woman is also practicing it.

“I think you should show some restraint, though.” (Yashiro)

Ginette probably feels satisfied too when everyone is happily eating her food. So, as long as Ginette herself keeps donating food, the right thing to do is to happily eat them. Well, regarding the material costs, it will be necessary to take measures to some extent….

“Speaking of which, besides the children from before, how many more people are there?”

“Hmm? That was everyone.” (Bertina)

No, wait, I’m sure there was only ten children.

Bertina patted her stomach and showed a big smile.

Even if it’s impossible to stop the donation, I will reduce the amount of food donated! I swear on my name!

Yashiro went into the church with such a determination in mind.