Inside the pale light, Estella was smiling fearlessly. The light weakened after a while before eventually disappeared. There, Estella was still in her human figure.

“Have there been cases of Judgment of Spirits mistrials before?” (Yashiro)

“Yashiro-san, there’s no room for feelings and emotions in the Judgement of Spirit, so there can be no mistrial.” (Ginette)

Is that so? This means she really is a girl….

Thinking so, Yashiro turned her line of sight at Estella again.

Her face is indeed androgynous, but if I look more carefully, her face is more on the beautiful side. Her slender arms and long legs make her figure looks even more feminine. The problem is her chest. I mistook her as a man because of her flat chest….

The blue vein popped out on Estella’s forehead.

Even so, this girl is quite something. If it’s an ordinary girl, I would have been hit once or twice already.

Good manners and good language…. is she someone from a rich family? Speaking of which, her clothes looks like a high quality stuff.

“You’re using ‘boku‘ to refer yourself, is this something related to your family situation?” (Yashiro)

“I figured that you were speaking and dressed like a man because you didn’t want to be seen as a girl. But well, it doesn’t seem you want to hide your gender in particular though.” (Yashiro)

“Why? I mean, anywhere, the rich families got a lot of complicated issue on their table.” (Yashiro)

The number of words were reduced. Touched her chin, Estella was staring at Yashiro wordlessly.

Hmm, I guess I still can’t see her as a girl. I’m not feel excitement even when she’s staring at me like now. Instead, “What are you looking at, punk?” — I have that kind of feeling.

“Your head is sharp.” (Estella)

“Who are you calling a dangerous creature with sharp head!?” (Yashiro)

“I didn’t say that…. I just praised you, but now I’m regretting it already.” (Estella)

Estella let out a sigh. She then stared at Yashiro with a sharp look different from before.

W-What? Do you want to fight?

“I’m sorry, Ginette-chan. May I borrow Yashiro-kun a little?” (Estella)

“Thank you very much.” (Estella)

Having said that, Estella grabbed Yashiro’s arm and tried to leave the kitchen together.

“Just come with me!” (Estella)

Do you want to invite me to fight outside? I’ll tell you this in advance, but I have no confidence in fistfight. If you let me be the only one who holds a weapon, I can make it a draw at least.

“I have something to talk.” (Estella)

“I mean, the topic that can’t be talked in front of the girls is only that.” (Yashiro)

“This guy, I’m seriously going to hit you….” (Estella)

Estella who shined clenched her fist. She then held Yashiro’s neck with her arm and locked his head. Yashiro was forcibly dragged out of the kitchen.

Strong! This power! She’s stronger than me!

Ouch! My head is locked under a girl’s armpit, so why can’t I feel something soft on the back on my head!? Spirit God, are you doing your job properly!?

Estella said such words to the children with a smiling face.

I also want to enjoy the breakfast, though.

Out of the kitchen, Yashiro was taken out of the church. Yashiro was released from the headlock after they were outside.

“This guy, I’ll make sure you pay for all the rudeness you’ve done to me later!” (Estella)

Yashiro squeezed his neck that was fixed in a strange posture.

If there’s a sprained muscle, I will request a compensation.

“You, are you aiming at Ginette-chan?” (Yashiro)

Suddenly, Estella asked such a question.

Aiming at Ginette, me? Don’t be stupid! What I’m aiming is the ownership of her restaurant…. It’s not like I can tell her that, though.

“I came to this city few days ago and there’s a lot of thing I don’t understand yet. So for a while, I will be troubling Ginette.” (Yashiro)

“Knowing Ginette’s personality, I’m sure she accepted you without a second thought.” (Estella)

“So far, there were a lot people who tried to exploit Ginette’s kindness.” (Estella)

Ginette who’s at the very bottom of the food chain, is still roaming freely up to now. Ginette has no money, but those big boobs…. there should be one or two people who aimed at Ginette as a woman. I just couldn’t imagine Ginette’s able to drive them away. This means….

“I’ve driven those people away!” (Estella)

“Yes. It’s just natural to chase off the bad insects that are trying to harm my friend.” (Estella)

I see. Ginette was able to live in peace so far, this is because Estella was looking after her from behind the scene.

“That’s good. Maybe it’s strange to hear this from me, but thanks anyway. I was somewhat relieved.” (Yashiro)

When Yashiro found out the fact that Ginette has always been protected by someone, he felt a relief for some reason. However, Estella’s gaze was still sharp.

“From now, you’ll be one of the men to be driven away too.” (Estella)

Wait a minute, I’ve never aimed at Ginette! Well, maybe the idea of taking over her restaurant did cross my mind, but that was never my goal.

“I just want to learn about this city. I swear I have no intention harming her!” (Yashiro)

All of a sudden, Estella pointed her finger at Yashiro and triggered the Judgement of Spirit. Yashiro’s body was covered in a pale light.

Without any preface…. What a scary girl….

After a while, the light wrapped Yashiro’s body disappeared.

“You have no intention of harming her, huh…. It looks like you’re telling the truth…. For now, at least.” (Estella)

“That’s what I’ve been telling you!” (Yashiro)

That was dangerous. If had an evil feeling for those big boobs even a little, I might have been turned into a frog.

My purpose is clear, “getting information about this city“, “food“, and “roof“. The matter about my eyes were always drawn to Ginette’s boobs seems to be within an acceptable range…. Good thing I didn’t lose to my libido.

“Then again, it doesn’t mean I will acknowledge you.” (Estella)

“It’s not like I want you to acknowledge me.” (Yashiro)

With a serious face, Estella flatly declared so.

“However, Ginette seems to trust you…. Oh well, unless you try to do something strange, I won’t do anything to make things rough.” (Estella)

“Why do you care about Ginette so much? Is this really because she’s your close friend?” (Yashiro)

This woman named Estela doesn’t seem to move with such a simple sense of justice. Those are the eyes of someone who’s looking at their own interests beyond the good intentions…. Yes, they are the same eyes as mine — con artist’s eyes.

“Like I said, I’m addicted to Ginette’s cooking. I don’t want to lose that taste. I think this is a good enough reason.” (Estella)

“If so, you’d better stop trying to kick me out of Hidamari-tei.” (Yashiro)

“Without me, that place will go out of business before long. The management is impossible for Ginette.” (Yashiro)

Estella folded his arm and nodded

“So, does this mean you’re going to rebuild that restaurant?” (Estella)

“To a level where I can live there without any inconveniences, that’s it.” (Yashiro)

To his answer, Estella zeroed her eyes and laughed. Then as though she had removed the iron mask she wore until a while ago, Estella genuinely smiled.

Estella returned to her serious expression and stared at Yashiro.

My instinct is telling me that I shouldn’t let my guard down around this girl.

“I will give you a suspended probation.” (Estella)

Estella puffed her cheeks like a little girl. It was surprisingly a lovely expression coming from her.

“I will observe you for a while.” (Estella)

“Can I use a picture diary?” (Yashiro)

“I’m not interested in your growth record! But if I sense a suspicious behavior from you, I will be ready to kick you out at any time….”  (Estella)

Having said that, Estella turned around and walked toward the church alone.

That was a fair statement. However, even if I don’t have her permission, I will stay where I want.

“Hey, do you have it? The authority to kick me out of Hidamari-tei.” (Yashiro)

When Yashiro threw such a question on her back, Estella stopped walking and turned her face to side a little.

“It’s not Hidamari-tei, I will kick you out of the 42nd District.” (Estella)

Facing forward, she added this before started walking again.

Does she know it…? Did she see my wanted poster before I scribbled on it…? I have to confirm it. I have to make it clear.

With such thoughts inside his head, Yashiro immediately ran towards Estella, caught her arm from behind, and forcibly pulled her back.

Estella who was about to enter the church, lost her balance and fell backwards. Yashiro caught Estella and supported her body using his own body. 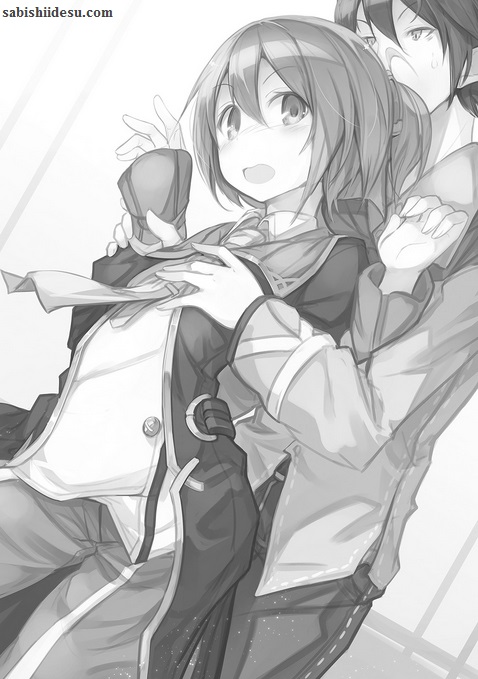 Yashiro felt a faint soft sensation on his palm. Looking at his left hand, he finally realized that he was holding Estella’s flat chest.

“No, this is, I was trying to help you! I think that something like accident, force majeure, or lucky moment, should not be condemned.” (Estella)

“Estella, there’s a saying in my hometown…. after five minutes.” (Yashiro)

“I wonder if I should stop trying to trust you.” (Estella)

“Oh, on the contrary, I’ve decided to trust you…. You’re indeed a girl.” (Yashiro)

“I’ve been telling that from the beginning!” (Estella)

“I will forgive you this time, so be careful from now on!” (Estella)

Estella left Yashiro and went into the church. When Yashiro entered the church, Ginette was waiting for him with a red face, puffy cheeks, and raised eyebrows — she seemed to be angry.

“Y-You shouldn’t do that kind of thing to a girl! Please repent!” (Ginette)

Thus Yashiro was taken to the confession chamber in the back of the chapel, and was forced to repent for a while before breakfast. Even though Yashiro complained that it was an accident, Sister Bertina didn’t believe it and kept telling Yashiro to confess his sin.

“I’m sorry. I actually thought it felt good despite being flat chest.” (Yashiro)

Yashiro from the big breasts faction, admitted that he had been fascinated by the flat chest for a moment.

After letting out a very long sigh, Bertina finally released Yashiro. Thus his sin has been purified….