Different from a short while ago, this time his claws didn’t shattered, it remained intact. That’s when Deizu realized that his own power had jumped high, and then thrusts his other claws at me.

It’s regrettable that my clothes have been damaged. I catch that claws and try to crush it using my grip strength. Whether his beast instincts kick on, he instantly jump back and take some distance from me.

I thought that in the brief of moment. Deizu instantly close the distance and unleashing a round kick at me, I dodge it.

Ride on the momentum, Deizu rotating his body in the air while attacks me with a backswing. I stop his hand with my foot this time.

His other available claws come to attack me as soon as his feet touch the ground. I grab his claws with an intention to crush it for sure this time. However, Deizu’s attack doesn’t end there. His face is approaching me while still in this position, and then he opens his mouth wide and tries to bite me on neck.

I put out an arm of the vacant one in front of Deizu to bite. He chewed on my arm to cut it with his teeth, but when realizing it doesn’t work out, he jump back again to take some distance. The portion of clothes he bitten has come off.

What is this? One side of my clothes was torn and the other side was tattered….. Does my appearance look strange now? I somewhat feel embarrassed…..haa~a…..

Let’s set aside the talk about clothes for the time being. I need to deal with Deizu in front of my eyes.

It’s easy to defeat him but the problem is what’s coming after that….. according to my experience up to now, he is going to enter the state where I don’t know whether he will live or die, after spitting out the red ball. There is an exception in Haosui’s case.

The reason he was so angry….. I want to hear it from him if possible, I’m thinking of how to do it right now…..

But the other party was in such a state, I got the feeling that his consciousness was steadily drifting towards a strange direction and impossible to talk…..

Okay, I need to incapacitate him first. If Deizu is silenced, the surrounding hardliners may settle down a little. I need to think of stopping this battle as the top priority right now.

While thinking about such a thing I speak to Deizu.

Not good, my voice couldn’t reach him. It can’t be helped. I have tried it at least.

He doesn’t give eyes to the other and come straight at me again. It seems he has completely obsessed to kill me. However, I’m going to be on attacking side this time.

I move in front of Deizu in an instant. He panicked when I suddenly appeared in front of him and swung his claws at me out of reflex. His action was terribly slow in my eyes.

I grab his arm in the middle of swinging, seal his movement by twisting his arm, and kick his body up using a little force.

My kick sink on his body, and then Deizu get blown up into the air at a tremendous speed. I put the strength into my feet and chasing after the figure of Deizu who is floating on the air.

I caught up with Deizu who still floating in the air in a blink of an eye and then beat him down. His body falls at a great speed towards the ground.

The ground cracked and gouged along with a tremendous impact sound as his body reached the surface. I land straight to the ground and turn my attention towards unmoving Deizu at the center of crater.

Deizu lost his consciousness like that. But before that, the red ball has almost come out from his mouth so I instantly close it with my hand. The red ball is still inside him so his life won’t be in danger for the time being.

However, there is another problem. Now that he unconscious, I couldn’t get any information about the reason he was so angry towards human. When I think about what to do, I noticed that the surroundings suddenly become quiet.

Hmm? What’s happened? The battle has stopped when I look around. The people from hardliner faction dropped their weapon on the spot. There are those who bite their lips in dejection and there are some people whose shedding tears while looking at me.

Eh? This situation makes me look like the bad guy here, isn’t it? Wh-What should I do….. *tototototo* about twenty beastmen came running towards me. Hmm? I’m sure this person is Marao’s father….. Gio-san, was it?

Telling me that, he starts to rub his head on the ground. Stop it!! I will completely look like a villain like this!! I never intended to kill anyone in the first place!!

[It’s all right!! Wazu boy doesn’t have any intention to kill anyone here!! He even told me to hold back!!] (Grave)

Grave-san is slowly approaching while saying so. That’s Grave-san for you!! I knew it~!! He is so cool~!! I’m saved~!! You are so reliable~!!

Gio-san raised his head. Grave-san nods for confirmation when Gio-san looks at him, I also nod when he shifted his line of sight at me. Feeling relieved, Gio-san shed tears as the power come back to his body.

[What is the reason Deizu so angry towards human?] (Wazu)

To my question, Gio-san closes his eyes while thinking of something. After some time passed, he opens his eyes and looks straight at me. He answers my question.

[Actually….. Deizu’s daughter was kidnapped using nefarious means by the people from southern kingdom. It was not only his daughter, many people from hardliner faction have the same circumstances as Deizu. A lot of them joined this war in order to save their daughter or son] (Gio)

I see….. no wonder he got angry. He felt the anger whenever he saw a human because of that. It was good I didn’t kill him but….. it was also true that I couldn’t leave him in his current state alone…..

[Deizu turned strange due to some cause….. please, if possible, would you help him?] (Gio)

Gio-san asking me that….. I’d like to help him but I don’t know what to do. Should I ask the goddesses again? But, I wonder if everything will be so convenient….. well, let’s just ask and hear their respond…..

Sunddenly, a light ball jump out of my bosom and soaring to the sky.

The sky shining brilliantly and a pillar of light appear near me from the sky. There is a lady inside that pillar of light. Elegant pink hair, proportional body with a lovely facial features, she wore nun-like clothes with high transparency but her important parts seems to be invisible for some reason.

Such a person slowly descended towards this place. Because of the strong divine aura, except me, everyone in his place is begin to prostrate themselves.

She landed to the ground and saw such a sight quietly. She uttered words with a voice like a whisper but reached everyone in this place.

Eh? What should I do? I got a really bad feeling about her….. 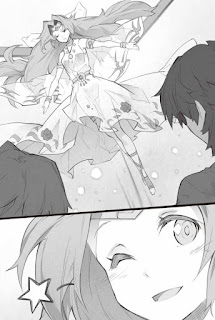