I have a little sister, she has black eyes and black hair just like me. Her talents came to light as she grew. The first thing that surprised my parents was she could remember the words in an instant and started talking even before she could walk properly.

However, my parents didn’t particularly concerned or found it strange, they were immediately believed that their child was a genius instead.

She attended the Kingdom’s National Academy, absorbed various knowledge, became familiar with magic, and within less than a year, there were no longer students or teacher who could win against my little sister.

My parents poured plenty of their affections towards such a genius little sister, to the extent they started neglecting me….. even so, I never hate my little sister because of that.

While my parents spoiled my little sister, I also gave her an adequate love as a big brother. My little sister used to stick on me anywhere, I think that our relationship as siblings wasn’t bad. Well, she always had a sullen face whenever Aria’s name came up for some reason…..

The person who resembling such a little sister is right in front of me, as the president of Amason commercial firm. Looking at me carefully after hear my murmur, she called me back with “Onii-chan”. Yeah, there is no mistake it’s her.

Now in front of me is my little sister Kagane who I haven’t seen since I went to the mountain, about 2 years and several months ago.

Kagane was growing quite a lot during the time I was away. Her cute facial features that were originally charmed everyone, now was mixed with beauty and further increased her charm. Well, it was a screaming face until just now…..

The hairstyle is divided into two at both ends of her long hair, she dressed in skirt-type dress with white color as a basis, the same dress as the people around her so it must be a clothes for business.

She now has a well-balanced body shape appropriate for a lady. Because Kagane looks so different from the one inside my memory, I can feel the length of month and day I was away.

Moreover, now she is the president of a famous company….. she really has become a splendid woman.

While I was thinking and thinking, Kagane pushed aside the employees who kept her down and ran toward here. Such a feat which made me think, where did that power coming from?

She’s heading straight towards me. This is a happy reunion with my little sister after a long time. I tried to catch Kagane with open arms but her momentum isn’t reduced at all. As soon as she come in front of my eyes, *gashi* she grab hold of my head. 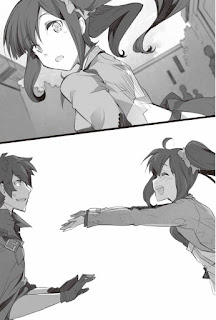 Then she took my lips…..

If you put the sound in this situation, that would be a *zukyuuun~*!! Later Kagane said that…..

We were invited into the inn which Amason firm had reserved. Led by Kagane, we entered a big room of the inn.

Freud, Grave-san, and Deizu, whether the three were minding us, they didn’t take a seat. In order to discuss the future, I, Kagane, and the female camp are sitting surrounding a table on the middle of the room, however…..

Kagane is sitting on my lap for some reason.

[In any worlds, the seat of a cute little sister has been determined to be on her beloved big brother’s lap!!] (Kagane)

I pointed an open seat at the opposite side of mine but Kagane puffed her cheeks and made a counter attack. Moreover, she said so while linking her arms around my neck.

It can’t be helped if my little sister wants to be spoiled by me now. I had thought about Kagane’s previous behavior, it was caused by an overflowing emotion because we haven’t seen each other for a long time. But it seems there are people here who didn’t think that way.

They are looking like ready to jump towards my little sister at any moment. Their gazes hurts….. I desperately explained that she was my little sister before and things had calmed down, but apparently that was an impossible feat now.

The female camp emitting black aura without hiding it (or has the lid broken?), while occasionally looking at Kagane with envy. Hmm, I wonder if I should let them to sit on my lap next time…..

[There seems to be a lot of women here, are you perhaps in a special relationship with one of them………. ~just kidding!!] (Kagane)

There is no use in hiding the secrets from Kagane so I honestly speak. Kagane looks at me with a surprised expression before turning her line of sight towards the female camp once more.

[Eeh!! Are you serious? Was my joke really hit the mark? In other words, all the women in this place are Onii-chan’s wives?] (Kagane)

To the “wives” remarks from Kagane, the female camp happily writhing their body and smiling. No, it hasn’t been decided yet.

[*sigh*….. I see, Onii-chan makes a harem….. moreover with these beautiful women and a cute child…..] (Kagane)

All the words flowing from kagane make me happy. No, although I can’t deny the beautiful and the cute parts, it’s not yet a harem. For the time being at least.

I want to explain the situation between me and the female camp all honestly, but then Kagane uttering surprising words.

[Then, if I enter the harem, there is no problem, isn’t there?] (Kagane)

[That’s a relief….. I really don’t know what to do if you were stolen from me by that bitc–that woman. If Harem, there is room for me to enter, right? Ah~ don’t worry!! Because in this world you can get married with me for the purpose of leaving the blood of my family!! There is no problem with this!! You did it, Onii-chan!!] (Kagane)

(TL : “that woman” here refers to Aria, I guess. I’m not really sure with this line, so please tell me if you have a better interpretation, この世界は家系の血を残すためという名目で私とも結婚出来るから！！ )

I have no idea what to say towards Kagane’s remark….. Huh? What are you really saying, Kagane? It was just like…..

[Hmm? Of course I do. I do love Onii-chan in a sexual meaning. Huh? Didn’t you notice my feeling?] (Kagane)

[Huh? I have been watching you with such feelings ever since a long time ago] (Kagane)

Eh? Is she telling the truth? Not a lie? But, she doesn’t seem to be joking or lying….. Huh? Are you serious?

[It doesn’t make a sense, I mean….. you are my blood related little sister, aren’t you?] (Wazu)

[Let’s break through such ethics. In addition…..

I hit myself in full power as I said so.