It’s been 2 years since the day I ran away from Imperial City.

Right now, I’m in the middle of frigid blizzard, but strangely, I’m not feeling cold at all. My limbs and my body could move normally.

I take one step forward and a scorching desert air spreading out this time, but I don’t feel hot nor sweating at all.

Just like now, the hail began to descend not long after that scorching sun spitting out a hot wave, what a funny place.

This place is “The Mountain”.

However, it’s not an ordinary mountain. People understand that this gigantic mountain is a dangerous place. Enough to say that no one would come near this place.

I think there are two reasons about why this place is dangerous. First one and the most inconvenient thing, is the climate that brutally changes.

The other reason, the 3 beasts in front of me can make for a good example of it.

First on the left side, 3m tall body with a head of a bull, bipedal walking creature that’s covered with black fur, an ultra-strong monster, the tribe so called “Minotaur”.

On its right hand is something like a giant wooden mallet. It’s looking me hungrily while drooling.

Next one is on the right side, quadruped black haired dog about 5m tall. However, it’s not just an ordinary dog, because it has 3 heads.

One body with three heads. . . I wonder if they could get along? Maybe a head in the middle is the leader? Because it’s spouting out a red flame, you know?

But it seems they’re concentrated in a single consciousness right now. All the three heads are drooling uncontrollably while looking at me.

Oh I see, they are thinking of me as food.

Then, the last one, standing in the middle on two legs? A big dragon about 7m tall, covered in black scale….

It’s a dragon with large claws that would be able to tear up all kinds of thing very easily. This guy is also drooling while looking at me. 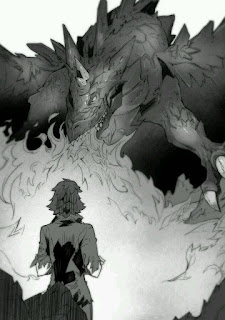 (Note: This illustration is from LN, just for a reference. Please do remember that the story in LN and WN, is a little different.)

It’s not limited to these 3 monsters. I have been living on this mountain for last two years, a place where monsters are roaming around freely. That’s why people avoided this place.

I was really…. really desperately trying to survive from the death on this mountain.

I mean, I was running away from the Imperial city like a crazy while crying. I couldn’t think of anything at that time, and when I realized it, I was here, in this mountain. I tried to get down the mountain but was chased by monsters.

I couldn’t predict the climate changes, my sense of directions all messed up so I lost. I was wandering around all over the places.

But, I survived. I survived in this harsh environment for two years. I got a little confidence in myself because of this.

By the way, the three headed dog from earlier is already showing up its belly after one punch. The three monsters from before are taking pose of submission respectively.

Look, I won’t eat you…. so please don’t stare at me with such teary eyes….

As you can see, the monsters here are weak. So weak that it was possible for an ordinary townspeople like me to defeat them. Only their number were large. You will find another weak monster after walking a few steps forward.

After these two years, there are no monsters that can win against me anymore. Like I said a short while ago, only their number are large.

Even if it’s a piece a cake in a 1-on-1 battle, when they’re attacking in groups, the degree of danger raised remarkably. Because the monsters usually come to attack in a group here, people doesn’t want to approach this mountain.

However, look at what’s soundly sleeping in front of me….

After understand that I won’t eat them, we from different races, worked together to fight a herd of monsters that suddenly appeared. Just before, some fish-like and cat-like monsters are also cooperating to attack us.

I was surprised, and I unintentionally….

They were looking at each other for a while before starting to move. I don’t know whether my words got through to them, though.

After living desperately in this mountain for two years, there is only one thing I want to do.

I want to meet people….

In this past two years, all I could see are just majestic nature, violence weather, and monsters. I haven’t spoken for a long time…. I just realized it after shouting to these guys.

That’s why, I want to meet people now, I want to speak with people by any means.

Thus I made up my mind. Let’s got down the Mountain!!

I’m already familiar with the mountain. This place is just like my backyard, so it’s impossible to get lost.

I advance with the intent to meet people in mind.

……….while have misunderstanding about various things about this Mountain.