I jumped onto the bed upon entering the room. Not too wide or too narrow, it’s a decent room. I can feel that it has been properly cleaned.

I almost got brainwashed. That Lula, what a fearful girl….. Setting that aside, I have to think about my future now.

The problem is my powers is too strong. Up until now, I thought of myself as simply an ordinary person. But the present me is an existence that can be called a monster. That’s why I don’t know what to do with myself…..

In the first place, is this all real…..? If you believed in Goddess-sama’s description, I could even destroy a star or two if seriously use my power.

It was frightening just to think about it….. Involuntarily, I was shivering inside while I wrapped my body on the bed. No matter how strong I’ve become, my soul is just that of an ordinary person. It couldn’t be helped if I’m scared…..

I don’t know how long I have been lost in thought, but I found a small hope inside my heart.

It’s certainly a frightening power. However, it wouldn’t have been possible to rescue Sarona-san without this power before at that time…..

I can save someone using this power. But if I’m always hesitated, when the time comes, I might not be able to protect someone I want to protect. Yeah, there is no reason to hesitate huh. Though I couldn’t use it thoughtlessly, I have decided to use it.

She surprised me. Because of that, I answered Lula’s call with a strange voice. When the door opened, Lula who was wearing an apron, gave me a wry smile. It was embarrassing…..

Quite time has passed since I entered my room. When I came down following Lula, the sun has already set. There are many people who seems to be adventurers at the table in the dining room. Everyone respectively eating, drinking, laughing, or grumbling. They are all having fun.

Lula guided me to a table at the corner of room, and I sat down there. Lula disappeared into the back counter after saying she would immediately come back with the food. While waiting for my meal to come, I observed the situation of the dining room.

(How nicee~! Everyone is having fun. I’m a little envious of them.)

“Someday, you also can make your own party as well. Here it is, sorry to keep you waiting.” (Kayla)

Kayla-san placed a dish in front of me while saying so. She read my mind and it was embarrassing. I changed my attention to the food.

Grilled seasoned meat, salad, soup, and bread. Nothing special with this food, even so, it’s quite a feast for me.

I usually ate grilled meat when I was living on that mountain. But at the elven village, there was only herbs and tree nuts.

I ate the foods wholeheartedly. Sometime, the parent and child duo was smiling happily watching me.

“What the heck is this!? It tastes so bad. I can’t eat something like this!!”

While feeling my stomach which was full after I finished my meal, some unforgivable words had reached my ears.

“That’s why I told you before to stop Homura from entering this place.”

“I know it already. I just want to try and eat food from this kind of place once in a while.”

I turned my eyes to the voice and saw 3 men were laughing and cracking an unpleasant smile.

(That guy in the middle, it seems he’s the first one who raised his voice.)

Red hair, morose eyes, he wore an armor which focused on mobility. On the left side, a man with quite long green hair covered one of his eye, a large cross spear was leaning against the wall on his back. On the right side, a narcissist-ish guy was playing with his long blonde hair. He wore an expensive robe and gave some magician-like vibe.

I suddenly had an urge to use force for some reason….. I didn’t feel any hesitation at all with them.

The situation got even worse while I was thinking this and that.

Lula protested to these three while clutching her apron.

“Maybe she’s the daughter of this worn-out inn owner.”

“Fumu, a daughter is it? Then, tell your father to do his job properly! The food taste’s bad, we can eat something like this.”

The blood thirst leaked out from everyone in the dining room because of those words.

“Hey, how could they know? They are adventurers from such a frontier town.”

On these words, the red haired man put his foot on a table while leaning his body in the chair.

“We are Black Falme, the party of A-rank adventurers.” 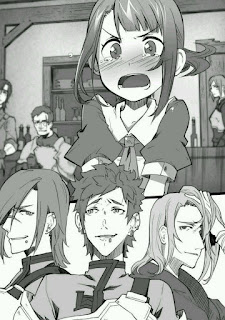 They kept glaring to intimidate Lula, but she without hesitation, still demanding their apologies.

To the sight, I clapped my hands while muttering a small “Oo…” voice.

The red-haired man reached out his hand toward Lula. In an instant, I moved between them and caught his hand while glaring back.

In the meantime, I used my other free hand to beckon Lula which was a little teary, to hide behind my back.

(This guy, he was seriously trying to strangle her just now.)

“What’s with this bastard? Do you want to die?”

The red-haired man tried to intimidate me by directing his blood thirst towards me.

On my back, Lula was clutching my clothes tightly. Before I can say anything, a rugged voice resounded inside the dining room.

“What is this commotion all about, you lot!?”

One Reply to “Chapter 15 – The Power of A-rank Adventurer”