I rush to the place where those people are gathered. There’s a group of 5-6 people, including a dirty-man who’s holding a child while pointing a small knife. On the other side, there’s a group of three people, women and a man who are confronting them.

(This is…. it looks like the child is being held hostage…. no, no, no, I can’t just jump into a conclusion. Maybe the dirty-man’s group are the good guys here.) 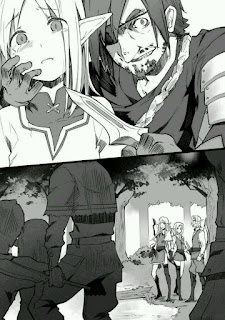 “Hey, why is there a brat in this kind of place? Well whatever, we can also sell him together with this child.”

Yup, they are the bad guys. However, you know what…. for some reason, I’m not scared at all. I could feel a little bit of danger from the monsters in that mountain, but recently, I couldn’t feel anything…..

Hmmm, I think they will manage it somehow.

Those guys are not a big of deal. Such small fries. Even I’m quite confident that I can handle it by myself…. But of course, it was impossible for me until just recently. I can’t let my guard down.

I survived living on the mountain, but I’m still an ordinary man. I need to properly look at the opponent, and be ready to move anytime.

“Heeh~ what’s wrong brat, are you too scared to move? Hey, someone go catch that brat!!”

After the dirty-man gave his command, from his group, a man full of scars came approaching me.

Usually, this kind of opponent is strong…. right? Or not? I mean, maybe he is full of scars because he’s weak and get injured a lot. He must have it hard, but I can’t feel sorry for him because he is a bad guy.

While the scars-man approaching, the man and women group didn’t even spare a single glance at me. It seems they’re not interested, and simply focused their attentions to the child who was being held hostage.

Eh? Are they ignoring me? It’s not true, right? They must be just too focused with the child, right? I will stay here okay~!! Let’s shake hands later….

Hmm…. from the three people, I think the woman in the front is the most approachable. But, let’s stop thinking unnecessary stuff for now. I must not lose sight of what’s in front of my eyes.

“Hey brat, if you don’t want to get hurt, don’t even think of resisting!”

Just before the scars-man’s hands touch me, I disappeared from his line of sight.

The scars-man had lost sight of me. Then, in front of the dirty-man with the knife who held the child, I appeared. I smelled something stink there.

You should properly take a bath and wash your clothes~! What if the child also become stink because of you~!

I hit the dirty-man’s hand which held the knife and pulled the child.

Eh? Just now, I think I heard some strange sound. Surely, his bones are not broken, right? That’s impossible, indeed.

The dirty-man screamed. I hold the children between the dirty-man group and these three people.

I didn’t look in the direction of the three people in particular, so I was late in realizing it.

It’s elves! These three people, and the child are Elves. Do you understand now? Apparently, this dirty-man’s group tried to kidnap an elf child to be sold to the slave dealer. Or maybe someone had been asking them secretly….

Either way, these weak guys are no match for the elves, there won’t be any problem even if I just watch from the side.

Well, I have rescued the child. I wonder what should I do now? It would be nice if we could talk, but what should we talking about?

Because I didn’t say anything, the elves group are little flustered. This child also, for some reason didn’t try to move away from me. Are you hurt somewhere?

Those guys also started to make a ruckus after seeing the dirty-man screamed. The elf which seemed to be the leader, had rushed to them since a while ago.

“The enemy of mine, listen to the sound of wind which calls the death.”

Just like a blade, the wind flew towards the dirty-man’s group, along with a high-pitched sound for a brief moment. Caught off guard, their body was slashed by the blade of wind. The blood splashed and they were no longer moving.

Magic!! It was the first time I saw magic. If I’m not mistaken, you put magic power into words to alter phenomenon or something, right? The magic strength of magic depends on its level. It’s so cool….

(Oops, come to think of it, there is still the scars-man from before….)

He was in a place that was a little away from us. Using this chance, he tried to escape as not to receive the same fate as his friends, but soon scattering his life by the two elves’ hands.

I’m looking at the scene in front of my eyes, (of course, I close the child’s eyes with my hand as not to see it).

I was fascinated with magic I saw for the first time. I changed my line of sight to the elf woman

Slender body with long shining silver hair. On her hips, hung a knife decorated with gems. While on her back, she was carrying a bow.

I was charmed by her. This something that’s naturally happen without me realizing it.

The silver haired elf woman turning around her body towards me.

“Thank you very much Stranger, you really helped us.”

She said with a thin smile blooming on her face.

I feel something jumps around inside my chest when I see her smile.

One Reply to “Chapter 3 – It Suddenly Falls”