I was falling from the house….

Well, you see, I couldn’t use magic so flying is out of the question. I couldn’t get down but using this method. I heard two screams from the direction of house. I couldn’t hear it well so I tried focusing my attention, but what reached my ears was flapping sounds and monster’s roaring.

Large number of bird-type monsters approached because they thought I was their food. Each of the houses had been encased in a barrier, because of that, they changed their target to me.

They closed in and tried to catch me who was falling, then…..

I hit it. I hit it lightly but the beak was shattered for some reason.

(Hey, was their beak this fragile? Oh, well.)

Using the momentum, I rotated my body midair and shot a kick to a monster’s face, sent it flying toward the other bird-type monster.

The flying monsters were surprised and tried to turn their body to escape, but it was too late. I kicked another monster and a bone breaking sound was heard. Still at it, I grabbed another monster’s foot and used my falling momentum to throw it to the ground.

It was slammed, with full blast.

(Oh, the ground was gouged out. Is the soil of this area brittle?)

I landed near the fallen monster, but the surrounding monsters were instantly attacking me.

One-eyed muscular monster, a cyclops, shot its big fist at me. I caught it with my hand and rotated it.

I rotated it 3 times. The surrounding monsters were devastated by the cyclops’ body. I throw it away and started to run towards the barrier in the center of monster crowd.

The monsters appeared one after another as if blocking my way. I caught nearby monster and did the same thing as before. Because there was a large number of monsters, I repeated this process while advancing forward.

(Oh, the next are wolf monsters.)

I arrived in front of the barrier. There was vast number of monster corpses were lying around behind me. For some reason, Sarona-san was taken aback upon seeing me.

Sweat was dripping from her forehead when she was the sight behind me.

(Huh? Why are you that surprised? Is there something to be surprised about? Hmm….Oh, well.)

Gazuna was also somewhat petrified, though I didn’t care because I hated him.

“Then, I will go kicking the monsters around here. Sarona-san, you just need to settle your fight that guy. I’m rooting on you! Good luck!” (Wazu)

I clenched my fist. I got fired up because she was cheering on me…..

Even though I was full of motivation, the monsters kept putting some distance from me.

Because the monster didn’t show any sign of moving even after I waited for a while, I decided to go after them instead. I started moving but the monsters run away at full speed to escape from me.

(Huh? Why do you run away? Wait a minute!! I’m thinking of defeating you all in front of Sarona-san to look cool, but why do you run away from me? Damn it, you ruined it!! I must be looks funny right now, chasing after the monsters)

Having understood the current situation, Gazuna called out to me with his face turned pale.

“Huh? I wonder, I just a person who is under the village’s care just recently.” (Wazu)

(Then, what on earth do you want to hear? More importantly, I don’t want to talk with you.)

The other elves still didn’t come out from their barrier-protected houses.

(What are they doing? I’m sure those monsters won’t come back anymore, though. More importantly, he seems going to keep talking to me at this rate. I hate it. Guys, come down quickly.)

His words have no end and his attention was focused on me.

Sarona-san used this chance to attack him with her knife. Though his wounds were healed by automatic recovery magic, Sarona-san didn’t cease her attacks. Defending and attacking, the circle kept continuing.

The two kept the exchange of offense and defense for a while before taking distance from each other. Their breathing were disordered.

Sarona-san’s physical strength greatly dropped because she kept moving around, and Gazuna’s magic seemed about to run dry because her robe kept healing his wounds. Their condition were similar but Sarona-san seemed has the upper-hand.

“Gazuna, why don’t you give up already? When your magic exhausted, even your life will be in danger. There’s nothing you can do about what had happened, but at least your life……” (Sarona)

“Hahaha!!! I don’t care anymore. I thought of exterminating everyone in front of your eyes, but I changed my mind. So….. 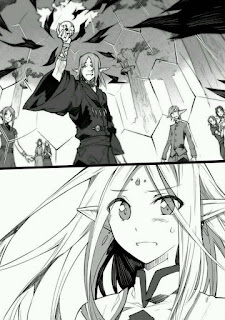 Gazuna took out a red ball from his robe and tossed it into his mouth.

One Reply to “Chapter 8 – Unconscious Monster”