My name is Wazu. 15 years old with black hair and black eyes, medium build and height, I had the appearance of a very ordinary man. My parents were common townsmen living in the Imperial City. I was also an ordinary brother of a cute little sister that two years younger than me who was adored by many.

However, even such an ordinary people like me, had a childhood friend of the same age that I could be proud of. Her name is Aria

She has a gentle azure eyes and blue long hair like the sky. Her figure is still that of a child, but there is no doubt that she will become a well-balanced beauty in the future.

She has a calm personality and kind to anyone without discrimination. She’s always smiling around me, but sometimes her dark…. no, it’s not good to speak badly of others so let’s stop at that.

When Aria and I were 12 years old, we promised to always be together in the future.

Strangely, my sister was always in a bad mood after she found out about it. I had a hard time because of that….

Oops we were talking about Aria right now.

At the age of 13, she was appointed as a “saint” by church to subdue the demon lord, and reluctantly joined Hero’s party.

Why was she feel reluctant? because Aria herself wasn’t that eager to go. However, her parents and the other people were persuading her to go.

I’m the only one who know about this matter, I guess.

That time, I couldn’t say anything…

Even though someone I love was snatched in front of my eyes, I couldn’t raise sound arguments when the adults saying “it’s for the world peace”. Since then, I’ve always prayed for Aria’s safety every day.

Then, about two years later…. just a little more time before my 15th birthday, a good news spreads around the world.

The world was wrapped in joy. However, until I see Aria for myself, I was still full of anxiety. Few weeks after the news, Aria came back. Arc de parade was held by townspeople to welcome the hero party before they reported to the king.

From the distance, I confirmed Aria’s figure with my eyes, I felt relieved from the bottom of my heart.

Now I think about it, at that time, she was strangely close with Hero-sama.

From Aria’s parents, I heard that she was busy with the report and celebration party in the palace, so I couldn’t meet her right away.

But a few days later, something that I would never forget happened.

That day, I was not able to settle down from the euphoria, because at last, I would be able to meet her.

I walked the town with unsteady steps. Casting skeptical gazes at the stalls and restaurants that were full of townspeople who were smiling full of happiness, before I realized it, I was walking in back alleys.

There, I saw something unbelievable….

I saw Aria and Hero-sama kissed in the back alleys, while hiding from people’s eyes…. 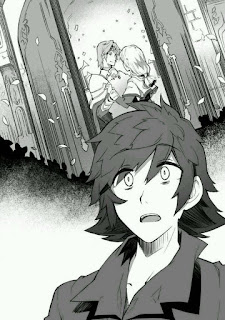 (Note: This illustration is from LN, just for a reference. Please do remember that the story in LN and WN, is a little different.)

I didn’t remember how I managed to get home. My head was blank. I couldn’t think of anything. Even when my sister talked to me anxiously, I was simply answering with a “Yeah….” or “Well….”

Even after coming to my room, I still couldn’t get rid of that image from my mind, I didn’t know what to do….

Having sat for a while, I noticed that my knees were wet…..

The promise we made that day would simply become a story of the past….

I didn’t want to stay in this city anymore….

Because there were too much memories about her in this town….

I scribbled some messages on a paper and ran away from the house with a little money I had. I wrote….

“Please don’t look for me, and take care yourself”.

That day, a man who was supposed to be celebrating his 15th birthday, has disappeared from the Imperial capital while crying.