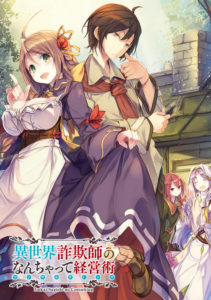 Oba Yashiro, the notorious con artist who made his name known throughout Japan.

His life burned out on the bad luck, and he was reborn in a big city where you can’t lie. In this world where liars are turned into frogs by the Spirit God who hates lies, Yashiro makes use of his silver tongue and the skills he cultivated as a con artist to rise up.

The story of a hero who was reborn in a different word, using his modern knowledge and quibble as weapons to help a busty beautiful girl in rebuilding a destitute restaurant and improving the living environment of the bottommost district.

The world of sword and magic where the hero and the demon king fight. Fell — a demon girl, sets foot on the land where humans live with her master the demon king, with a purpose of establishing friendly relationship with the human race.

Under such circumstances, despite possessing an extraordinary power as a demon race, Fell is continuously being pushed around by the humans around her.

Later in the distant future, the diary that Fell wrote during that time will be found in the deepest level of the biggest dungeon in the world, and become a controversy. There are those who call it a holy scripture, while the others call it a taboo book.

This is story about a demon girl called Fell and her diary, the story of laughter and tears.

The World’s Strongest Martial Artist who has Worked too Hard, Survives in the Magic World with Ease 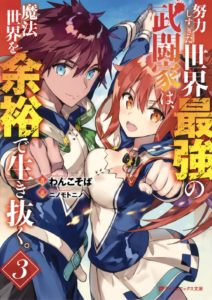 A young martial artist who died was reincarnated into another world where magic was commonly used in a daily basis, as a boy named Ash. However, after knowing he would never be able to use magic, his parents abandoned him in the forest when he was still five years old.

Nevertheless, Ash who has a strong yearning for magic since his previous life, continued to train desperately every day under the guidance of a retired hero who picked him up.

Unfortunately, even after he reached the age of 16, there was still no sign he would be able to use magic. However, Ash didn’t aware that at that time, he already had enough power to defeat the demon lord with a single punch….

I’ve made some changes in my hosting server. If you’ve subscribed to this blog but didn’t receive any notifications when I posted an update, you need to re-subscribe.

The contents of this blog are just fanworks based on the originals, so keep in mind that they won’t be 100% same. If you like the novels, please support the authors by purchasing their books (physical/digital) if available!